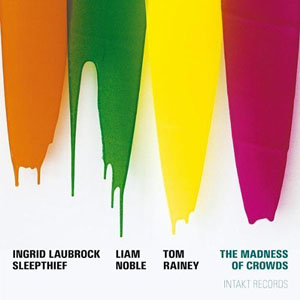 As of The Madness of Crowds, saxophonist Laubrock, pianist Liam Noble and drummer Tom Rainey are one of the most rewarding bands out there. They were before, but now the clarity and depth of interaction in their music is enough to deepen that assertion, and when a signature sound also comes as part of the deal then it's time for the loud applause.

Laubrock has evidently arrived at a point in her musical journey where she's more concerned with functioning as a player in a group than what might be called the customary virtuosic flights. As an improviser on tenor sax there are faint traces of Frank Lowe, stemming from an intent on fashioning new vocabularies. When she keeps the company of Noble and Rainey—both players for whom the easy option is never anything but a cop-out—the resulting music entices and intrigues in equal measure. The initial impressions of stealth and caution, on "You Never Know What's in the Next Room," give way, with close listening, to notions of something almost pastoral, especially in view of Laubrock's work.

The cryptically-titled "Hindsight Is Always 20/20" doesn't merely go to show that often nothing can be read into a title. Delicate though Noble's touch is, it's the element around which the music coalesces. Rainey proves he can be as subtle with mallets as he is elsewhere with brushes, while Laubrock is by turns unassuming and assertive, the latter without damaging the surface of the music—which, given the sparse resources, is full of tension and life.

In view of all this, the individuality of the music comes as no surprise, any more than the trio achieving it so effortlessly. Here's to the next installment.

Extraordinary Popular Delusions; You Never Know What's In The Next Room; The Slow Poisoners; There She Goes with Her Eye Out; South Sea Bubble; Haunted Houses; Does Your Mother Know You're Out?; Tulipmania; Hindsight Is Always 20/20.