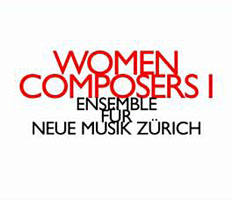 Even in the liberal societies of the Western world, women have rarely been recognized for their contributions to the arts in the same manner as men. Music has been a particularly difficult field for them to break into, despite some having rather sublime talent. From Fanny Mendelssohn and Clara Schumann to Lili Boulanger and her sister, the great Nadia Boulanger, their courage and talent has been celebrated in circles no larger than small coteries of cognoscenti. The celebrated elder Madame Boulanger was, however, composition teacher to several male musicians of great repute, including Egberto Gismonti and Keith Jarrett. Even today, few women are recognized or celebrated for their contributions to music. So when a group of supremely talented men of the superb sextet, Ensemble Für Neue Musik, Zürich decide to spread the good word, an album such as Women Composers I is a welcome addition to the literature of modern music.

It is hard, given the constraints of time, to bring a large program of music representing women composers in modern music the recognition it deserves, but the Ensemble has done a truly remarkable job with the program on this album. Five composers from countries as far removed as Switzerland, Romania and Italy to Australia and Japan are on this program, and it is a wondrous event. The album begins with Swiss-born Katherina Rosenberger's "Scatter 2.0." Composed for sextet, the woodwinds, strings and percussion are featured in glorious pursuit of each other. The timbral elegance and splashes of tonal color make this lively piece an absolute delight, even in the tense energy of the composition's middle section. "Piccolo Studio da Concerto," by Italian Ada Gentile, is played by pianist Viktor Müller alone. This is a demanding piece that explores every nook and cranny, every tone and timbre—indeed every aspect of the majestic instrument. Müller's virtuosity and great sensitivity for the material makes this short study utterly memorable. "OMENS Thesaurós," by the brilliant Romanian Carmen Maria Caâneci, opens the doors of perception to a Pandora's box of dazzling audio proportions that evoke much visual splendor by the entire ensemble.

The Chinese-Australian composer, Lisa Lim, contributes "Sonorous Body," a composition that is brought to life by the wild adventures of the solo clarinet. Physiology meets soul and tone meets color as the piece ends in consummate splendor. Japanese composer Noriko Hisada ends the program with the vividly colored "Yellow Axis," its architecture and spatial geometry stirring the blood and spirit as the Ensemble depicts the power that converges in a vortex of body, mind and soul. If the world looks at modern women composers with wonder again, this album will have played its part in shining a light on five of them who set it aflame with their musical ingenuity.