The Life & Songs of Emmylou Harris

By DOUG COLLETTE
December 3, 2016
Sign in to view read count 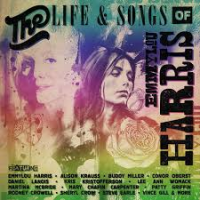 When Emmylou Harris truly began her solo career, after working with the late Gram Parsons upon recommendation from Chris Hillman, she quite quickly transcended the s 'cosmic American music' created by the former member of The Byrds and the co-founder of The Flying Burrito Brothers. Over the course of its near two-hour duration, The Life and Songs draws the arc of Harris' career as it subsequently influenced generations of musicians (as depicted with the densely-detailed graphics on the inside of this understated design and color on this CD/DVD package) .

The list of participants in this January 2015 show, recorded at the famous DAR Constitution Hall in Washington, D.C., includes her contemporaries and younger artists who cut their teeth on the music of Harris as well as that which influenced her. Guitarist/songwriter Rodney Crowell may not be the most famous name of the former group, but as an artist in his own right and co-leader of the 'Hot Band' that accompanied Harris on her earliest tours, he is one of the most significant artists, so it's arguable he deserves more than one solo turn, his world-weary but resolute rendition of "You're Still On My Mind."

On the other hand, Alison Krauss' skyrocketing popularity in recent years warrants her placement near the end of the show and she is more than up to the task of covering two familiar tunes, "Till I Gain Control Again" and "Cash on the Barrelhead." Of course, she, like most of the artists on the roster, benefits from the sharp accompaniment of the rightfully-name 'All Star Band,' including the erstwhile Black Crowes guitarist Audley Freed and string-instrument session-man nonpareil Greg Leisz; the corps of tasteful players helps impart the eclecticism that lifts this music into a realm beyond what might be termed the modern or old-school country of Lee Ann Womack ("Born to Run") or Martina McBride ("When I Stop Dreaming"). In fact, Mavis Staples' rousing rendition of "Will The Circle Be Unbroken" may well be a commentary on the lineage of this music and its artists both young and old represented here.

The group provides support equally seasoned and sympathetic, whether it's a name who's a Harris peer like Kris Kristofferson and Vince Gill or younger artist like Conor Oberst and The Milk Carton Kids, who owe a different sort of inspiration to Emmylou. In fact, the ensemble offers a palpable continuity to over two dozen performances by a remarkable list of artists, some of whom fit the alternative country label before the term was coined: Lucinda Williams on the aptly chosen "Hickory Wind" (where she seems as transfixed as her audience) and the equally appropriate "Sin City" by Steve Earle( one of the two bonus inclusions)—reside naturally next to those who aid the inroads of Americana into contemporary country realm, such as Trampled by Turtles offering "Bluebird Wine" and Shovels & Rope on Crowell's "Leaving Louisiana in the Broad Daylight."

Fascinating and legitimate collaborations abound here as well including Hillman and Herb Pedersen's take on "Wheels" as well as Harris,who, after a most gracious testament to her audience at large prior to revisiting her work with Daniel Lanois on "Blackhawk." while nouveau Americana band Iron & Wine play "Wrecking Ball" with the Canadian musician/producer as well. As with the Blackbird Presentation in homage to the Grateful Dead's Jerry Garcia, Dear Jerry (Rounder, 2016),the audio and video quality is comparable to the astute choice of material and its no-frills renderings accordingly (Dead drummer Bill Kreutzmann's song Justin is the director of the film).

All of which is fully in line with the artistry of the woman who sparked these composers and musicians, more than enough motivation to delve further into Emmylou Harris' work and that of the contributors to this event.