By GLENN ASTARITA
March 5, 2019
Sign in to view read count 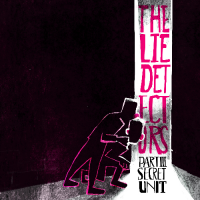 Maoz has aligned with composer, producer and saxophonist John Zorn's radical Jewish culture underpinnings, namely on Tzadik Records among other disparate journeys. Indeed, he's a multifaceted guitarist whose clever use of distortion techniques inject a polytonal seasoning into the program, complemented by Sirkis' thunderous backbeats and complex fills, paralleling much of his work for MoonJune Records, featuring guitar hero Mark Wingfield and other notables.

On several tracks the duo dishes out blossoming choruses with climactic build-ups amid the guitarist's oddball effects, often contrasted with dark thematic content or variable sub-motifs and reverse-engineering processes. They even toss in some mild Spanish bravado during "Here and There," whereas Maoz' distortion infused tonal splashes and Sirkis' pummeling polyrhythmic grooves comprise the bulk of these works. But "Sting" begins with an airy funk vamp, amped by the artists' linear unison runs. Here, Maoz diminishes the primary hook via dour overtones, followed by call and response riffs with Sirkis. The guitarist's odd-metered phrasings, blazing single note lines and the drummer's hyper-speed support and mammoth press rolls precede a vicious boogie rock jaunt, although they lighten the tornadic flow on "Zoo," regulated by Sirkis' subdued mallet work and delicate cymbal hits.

The musicians seemingly exhaust most capabilities for an energized, penetrating and high-volume hell-raising effort, abated with intermittent quiet spots and inward-looking improvisational segments. Yet the duo's uplifting synergy, engaging compositional concepts and charismatic inner-workings add a flavorful topping to their take no prisoners approach.