Home » Jazz Articles » Christina Gustafsson: The Law Of The Lady

Christina Gustafsson: The Law Of The Lady

By Chris Mosey
December 5, 2012
Sign in to view read count 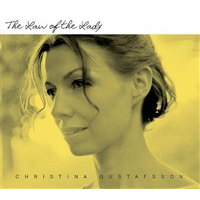 This has nothing to do with the transition to democracy in Burma; instead, it's Swedish jazz singer Christina Gustafsson's third attempt at emerging from under the shadow cast by her much better-known sister, Rigmor. Sadly, it's unlikely to make much of a dent internationally.

The principal fault lies in drummer Calle Rasmusson's production; there is far too much of it. Rasmusson has assembled some extremely talented musicians, including two gifted guitarists, Erik Söderlind and Max Schultz, award-winning flautist Magnus Lindgren and pianist Adam Forkelid. They provide some memorable moments, but nothing ever really gels as a whole, the music remaining "on the page," bereft of spontaneity and feeling.

A pity, because Gustafsson has obviously made a big effort. She talks of pursuing a vision and wrote the music for eight of these ten songs, although, as on previous outings, the lyrics are credited to others—primarily, in this case, to Stefan Danielsson.

Sometimes Danielsson has problems with his English. On "Close To Here," he makes a valiant but doomed bid to rhyme magic wand with wonderland, while "Love You Too" comes up with a somewhat baffling proposition: "You seem to be waking an ongoing dream to ease the pressure on your self-esteem." However, fair's fair; there are fewer linguistic faux pas than on Gustafsson's two previous albums.

There is one golden oldie. This is Rodgers and Hammerstein's "It Might As Well Be Spring," from the 1945 movie State Fair. It's a regular part of Gustafsson's live act with her trio, but here the singer is upstaged by Lindgren's superb solo.

Vocally, Gustafsson is at her best and most self-assured on guitarist Söderlind's "My Own Way Out," a meditation on the end of a love affair with excellent lyrics by Danielsson.

Johan Setterlind's trumpet gives a lift to the '70s-ish "Hours Passing By," but no one can do much to save the closer, the nondescript, simpering ballad "I Need Someone," dominated by heavy-handed and wisely unaccredited piano.

Here and there light gets through, providing a glimpse of what might have been. Perhaps more will emerge next time around.

You Make It; Breathing, Air And Such; The Law Of The Lady; Close To Here; It Might As Well Be Spring; My Own Way Out; Sometimes; Hours Passing By; Love You Too; I Need Someone.