By John Kelman
December 4, 2012
Sign in to view read count 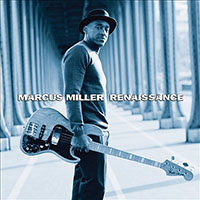 Some things change, other things stay the same. Marcus Miller—producer and performer with everyone from soul singer Luther Vandross and pianist Herbie Hancock to guitarist George Benson and Miles Davis, composing and producing the trumpeter's late period classic Tutu (Warner Bros., 1986)—has been releasing solo albums since 1983, but it was with The Sun Don't Lie (PRA, 1993) and Tales (PRA, 1994) that the bassist/bass clarinetist established a modus operandi that has served him well in the ensuing decades. Renaissance fits comfortably within Miller's overall discography, with plenty of the cornerstones upon which he's built his audience, but there are some differences as well...and, in this case, that's a very good thing.

As undeniably talented a player as he is—hundreds, if not thousands of recording sessions as a sideman can't be wrong—Miller's penchant for making overly bass-heavy albums has, to some extent, begun to render his own records a little too predictable. Still, his records are always profoundly deep in the groove department, with Miller quite possibly the funkiest bassist to emerge from the Stanley Clarke and Jaco Pastorius camps of the 1970s. There's still plenty of groove on Renaissance, and still plenty of room for Miller's irrepressible virtuosity, but the writing is broader, the arrangements more instrumentally balanced and, even though there are a few guests, he's largely working with a stable core group that includes keyboardist Federico Gonzales Peña and saxophonist Alex Han, both of whom appeared on Miller's recent A Night In Monte Carlo and the also-live Tutu Revisited, both released in 2011 on the Dreyfus imprint.

Guitarist Adam Rogers, appearing on half the album, and singer Gretchen Parlato, who contributes wordless vocals alongside Ruben Blades on the lovely Brazilian-informed ballad "Setembro (Brazilian Wedding Song)"—one of six covers that also includes an impressive and moving a cappella closer by Miller, the Jackson Five hit, "I'll Be There," paying tribute to the late Michael Jackson—are surprise participants, but suggest that Miller's far more attuned to what's going beyond his usual circles than might be expected. And that's also a very good thing.

It's a more diverse program than usual that, amongst its seven Miller originals, includes the dark ballad, "Gorée (Go-ray)," a gorgeous feature for his bass clarinet work that kicks into double time for a more dramatic climax, and "Cee-Tee-Eye," Miller's visceral tribute to producer Creed Taylor's influential CTI label of the 1960s and '70s. Elsewhere, a lengthy look at WAR's hit, "Slippin' Into Darkness" is equally booty-shaking, with strong solos from guest pianist Kris Bowers and Cleveland trumpeter Sean Jones (one of the set's most impressive) before opening up for one of Miller's staggering, lightning fast but always in-the-pocket features.

For those who've always appreciated Miller's multifaceted talents but have grown a little tired of the sameness of his recent solo recordings, Renaissance is a refreshing reminder that he's as good a writer, a bassist and a producer as ever and, in a career now in its fourth decade and with a little better balance across the board, is still capable of making compelling music that's as good as—or, in this case, even better than—either of those seminal mid-'90s PRA dates.