By John Eyles
December 5, 2012
Sign in to view read count 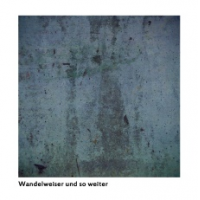 This ambitious six-disc boxed set will surely come to be seen as a landmark release from Another Timbre. Whereas the label has previously issued four or five separate CDs at a time, linked by some overarching theme—for instance, "Duos with brass" or "The guitar series"—this time around, it has put together six connected discs as a set. The connection is contained in the title of the set: Wandelweiser Und So Weiter translates as "Wandelweiser and so on"—the Wandelweiser Group being a well-known international group of composers and performers with its own record label and publishing arm.

The group's music is characterized by "the evaluation and integration of silence" (as key member Radu Malfatti has described it), frequently being very quiet or containing periods of silence (a description that applies to all of the music here). Since the group was created in 1992, its music has been highly influential, not only on genres such as lowercase and electro-acoustic improvisation (eai) but also on the ways that many people now listen to music, accepting that everyday ambient sounds blend into it.

While the box set contains realizations of pieces by several key members of the Wandelweiser Group—including Dutch co-founder and flautist Antoine Beuger, Swiss clarinetist Jürg Frey, Austrian trombonist Malfatti, American guitarist Michael Pisaro, and Swiss pianist Manfred Werder—the most important part of the box's title is that "and so on." It signals that the music in the set goes beyond Wandelweiser, including pieces by John Cage— who was very influential on the group—and by other composers influenced by the group.

The music covers a period of two-thirds of a century, stretching from Cage's brief 1944 prepared piano piece "Prelude for Meditation" right up to compositions such as Frey's "Circular Music No. 2" (2012)—YouTube extract, below—and Anett Németh's hauntingly beautiful "Eine Unbedeutende Aussage" (2012). Along the way, it takes in John White's ingenious "Drinking and Hooting Machine" (1971) in which players blow across the necks of water-filled bottles to generate tones, between blows taking drinks of the water so as to alter the tone produced.

In their way, the titles of the six individual discs which make up the set reflect its diversity, all of them employing water metaphors—Confluences, Crosscurrents, Drifts, Eddies, Undertows and Upwellings. The programming of the music is not chronological or thematic (in fact, maybe it is pragmatic, in order to fit as much music as possible onto each disc), so every disc contains a cross-section of the music. The discs could easily have been released separately and simultaneously, as each of them stands alone in its own right without reference to the others. However, there is a clear logic to releasing them all together in one package, as the whole ends up being greater than the sum of the parts and creates a consistent picture of Wandelweiser music, its roots and branches.

Close to sixty musicians contribute to the performances on the set, with the largest grouping being the fifteen-strong Edges Ensemble, directed by pianist Philip Thomas. A select few of the performers are also composers of pieces, notably Sfirri, Malfatti, Frey, Jason Brogan, violinist Angharad Davies, electronicist Phil Durrant, bassist Dominic Lash, Annett Németh and James Saunders. Despite the presence of many players of the caliber of Malfatti, Frey, Durrant, Lash, Davies and her brother Rhodri, there is very little individual instrumental virtuosity on display here.

Across the albums' thirty-seven tracks, the emphasis is on instruments being deployed to generate sounds appropriate to the compositions and fitting together to create soundscapes that slowly and gently evolve, often with intermittent silences of various durations. This is just as true on "#08.01.12," the set's only piece which is identified as an improvisation, featuring Neil Davidson on guitar and objects, Rhodri Davies on electric harp, Jane Dickson on piano, Patrick Farmer on amplified objects and open CD players, and Dimitra Lazaridou-Chatzigoga on zither; although improvising, the five are true to the spirit of the Wandelweiser ethos, keeping their contributions subdued and leaving plenty of space. Tellingly, when the CD is played straight through, the transitions from Stefan Thut's composition "Many, 1-4" into that improvisation and then onward into Sfirri's composition "For the choice of directions" are barely noticeable, so seamless are the joins and so consistent the moods and sounds of the pieces. Similarly, that 1944 Cage piece has been well chosen and it too fits in seamlessly, with the transition to Sfirri's "Little by little" barely causing a raised eyebrow.

Running for nine minutes short of eight hours (none of the discs runs for under 77 minutes), this set is so crammed full of excellent, engaging music that it would be churlish to pick highlights. Instead, it perfectly lends itself to total immersion in the music of Wandelweiser, an experience that is by turns beautiful, exhilarating, relaxing and trance-inducing. Exquisitely packaged, and documented in an accompanying 24-page booklet, this is undoubtedly one of the releases of the year. Music to enjoy and savor for decades to come.