By Andrew Velez
November 3, 2007
Sign in to view read count 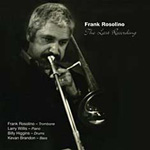 Born into a musical family, trombonist Frank Rosolino had little formal training. During high school years in Detroit he played with Milt Jackson; as Diane Armesto, Rosolino's former manager (and to whom we owe thanks for preserving this previously unreleased set) observes in her liner notes, "Perhaps most influential of all was the street education Frank received sitting in at the Mirror Ballroom...where other to-be renowned musicians also congregated, such as the Jones Brothers Thad, Elvin and Hank.

After serving in WWII, Rosolino's early big band experience included Gene Krupa (1948-49) and later Stan Kenton (1952-54), before he joined Howard Rumsey's Lighthouse All-Stars during the late 1950s. Among the distinctive qualities of his playing was an ability to combine bop harmony with swing; a ten-minute take on "I Thought About You, a Jimmy Van Heusen standard, offers some swell peak Rosolino. Abetted by pianist Larry Willis, Rosolino begins rather playfully before segueing into varied shifts in harmony and time. Then a quiet solo by Willis provides some lyrical contrast before Rosolino returns with further changes in harmony and time. When he finally concludes, it's with the surging warmth of a beautiful, lengthy extended line that's as striking as it is irresistible.

A shorter rendition of the song is also included, where the adroitness of his playing is especially evident in the opening section. Here the ever-so-light dusting by drummer Billy Higgins seems more present. We're talking fine musical conversation. Just how much he was capable of mining from a single tune is further evidenced by two takes on "Misty ; the extended version is as fun as a summertime tumble down a grassy hill.

Sadly, a sufferer from severe depression (which was generally unknown then), his life ended tragically at only fifty-two, with the murder of his children and his own suicide in 1978. Thanks to his friend Armetos' determination we can now enjoy what ought to endure—his life-affirming music.