BY PAT YOUNGSPIEL
October 7, 2018
Sign in to view read count 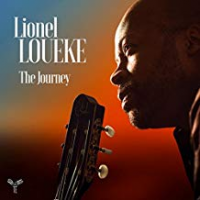 The Journey finds Benin's guitar prodigy Lionel Loueke in a stripped-back setting, often painting gentle sound-sketches using only his voice and a guitar. In place of his long-standing trio, comprised of drummer Ferenc Nemeth and double bassist Massimo Biolcati, Loueke has assembled a divers array of guest musicians for subtle accompaniment when needed. The fifteen songs compiled on this album exhibit some of the most versatile music the guitarist has created to date, and represent a sort of summary of his career-spanning works. The creator himself states "This album is a very personal project—it is the clearest reflection of the melodies and musical atmosphere that I carry within me every day."

Besides the jumpy funk-infused opener "Bouriyan" and jam tracks like "Bawo," folkier elements are especially prominent. "Molika" or "Vi Gnin" display the extent to which Loueke has developed as a vocalist, and carry most fragile melodies into the open. While most compositions rely on various acoustic guitars, some of his signature electric guitar playing makes it on to the record as well, the loop-based "Dark Lightning" being a prime example. He also draws from his past catalogue and presents reinterpretations of "Okagbé" and "Gbede Temin," now written together "Gbêdetemin." Both songs were featured on the trio-recording Gilfema (ObliqSound, 2005) and have been stripped down to their very core elements, now presented at a much slower pace in a much more atmospheric fashion. The booklet translates what Loueke sings in the Benin native Fon and reveals lyrics that contemplate war, and question the world we live in.

While dancing rhythms and celebratory chants, typical for Lionel Loueke, do find their way into this record, the more reflective side of things prevails and makes this endeavor one of a very profound and touching amplitude. The minimalist instrumental approach only adds to this intimate feeling and places the listener right by the source. If not in person, then this is probably the closest one might ever get to meeting Lionel Loueke.