BY ERNEST BARTELDES
July 15, 2007
Sign in to view read count 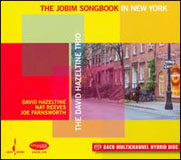 On this project, pianist David Hazeltine takes on the music of the late Jobim (who would have turned eighty in 2007) by looking at the music from an American point of view, without the typical bossa nova elements. Most of the music presented here is well-known, from "The Girl from Ipanema to "Quiet Nights of Quiet Stars (titled "Quiet Nights on the CD), but what Hazeltine does here is augment the classical influence that the songs' writer brought to them.

One of the highlights is "Wave, which begins with the melody popularized in the US by Frank Sinatra. "One Note Samba makes good use of its syncopated beat to showcase the talents of bassist Nat Reeves and drummer Joe Farnsworth.

"Caminhos Cruzados (Crossed Paths) is a song from Jobim's early partnership with Newton Mendonça that did not become a household tune. The song's original lyrics speak of a lover who needs to call an affair off because he is tired of the other partner's attitude towards him (a recurring theme in bossa nova). Hazeltine uses the melody's sad tone to his advantage, playing slow notes to enhance its feel.

"The Girl From Ipanema may be the best-known Brazilian song of all time, with thousands of renditions. Hazeltine's take utilizes a fast-paced modern jazz beat that comes in, does its job and ends in the length of a pop single—just over four minutes.

The Jobim Songbook in New York is not for strict bossa nova fans. It is, instead, a jazz disc made with an open mind. Hazeltine dares to find new elements in songs ingrained into the fabric of popular music.