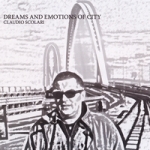 Dreams And Emotions Of City is drummer/percussionist Claudio Scolari's third release in as many years, showing a deepening exploration of the intersection of music and emotions. 2005's Reflex and 2006's The My Fourteen Songs, both also released on Principal Records, were primarily music as emotional expression, sound painting in the abstract.

Dreams And Emotions Of City falls in between the sound worlds of the previous two albums. Reflex was on the more abstract side with much layering, while Fourteen Songs relied heavily on Donnie Romano's blues rock guitar riffs to create the moods in front of Scolari's drums and electronics.

Romano returns on Dreams, still staying within the blues rock vein, but is not used as prevalently. The new and quite evocative sound is Simone Scolari's trumpet, which adds an intensity and a mournful soulfulness, most of the time, in the manner of Tomasz Stanko. Martina Gianotti returns on "City woman, where her unadulterated voice is accompanied by a processed version of same.

Scolari is not only the drummer, but also plays piano and synthesizer, as well as composing the music and adding the electronics. Given the album's title, it is not surprising that the individual tunes' titles and moods center on reactions to different aspects of city life and the people living it.

The various emotions that are evoked can be very engaging, especially when the trumpet mixes with the echoed bass drum. Scolari shows a very good command of his resources by making every moment count, with all but one of the tracks being under five minutes.

Dreams And Emotions Of City is an album that will reveal many layers over time.