BY DOUG COLLETTE
February 18, 2010
Sign in to view read count 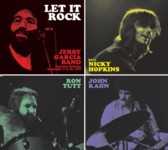 Jerry Garcia never officially announced he was embarking on a solo career apart from the Grateful Dead, the band for which he served as titular leader during its entire existence. Moved by the restless work ethic of the truly professional musician, the guitarist/vocalist/composer began working with a group dubbed Legion of Mary in 1975. Only after realigning that personnel over the next year did his unit became The Jerry Garcia Band (JGB).

This two-CD recording from shows at Keystone Berkeley in November of 1975 represents the very first lineup of players under that moniker. While it includes some familiar names (such as bassist John Kahn) and offers some familiar material (reggae in the form of Jimmy Cliff's "Sitting in Limbo"), this composite release boasts more than a little distinction (duly noted in David Gans' astute liner essay).

Much of that distinction derives from the presence of British pianist Nicky Hopkins, at that point a renowned stalwart of British studio work with The Who, Jeff Beck, and The Rolling Stones. Hopkins had also recorded and toured with Jefferson Airplane circa Volunteers (RCA, 1969) and was a principal in a revamped Quicksilver Messenger Service that recorded Shady Grove (Capitol, 1969).

Let It Rock might serve as a template for The Jerry Garcia Band as it evolved over the years, engaging in extensive improvisation on an eclectic array of material, like Allen Toussaint's "I'll Take A Melody" and "That's What Love Will Make you Do," as well as excerpts from the Dead's estimable canon in the form of Garcia and co-writer Robert Hunter's "Sugaree" and "Friend of the Devil."

"(I'm A) Road Runner" is typical of the simplicity of song structure that allows involved jams. As on Hopkins' own "Pig's Boogie," the group—also including drummer Ron Tutt, at that time also working with Elvis Presley—confidently extends itself, knowing where they're going collectively at any given moment. Most exploratory, perhaps, is the way JGB takes the Rolling Stones' "Let's Spend the Night Together" into a different realm altogether from the original; not designed as an improvisational vehicle, the quartet opens both itself and the material wide open in a leisurely take that redefines the song.

A sign of the open-mindedness Garcia always displayed, as the insatiably curious musician he was, the leader of the band nurtures this approach as much as he sets the tone for the unit. The Jerry Garcia Band didn't always take chances with such abandon as it does on Let It Rock, which makes this title a combination encouragement and command.

CD1: Let It Rock; Tore Up Over You; Friend Of The Devil; They Love Each Other; It's Too Late; Pig's Boogie; Band Introductions; Sitting In Limbo; (I'm A) Road Runner. CD2: Sugaree; I'll Take A Melody; That's What Love Will Make You Do; Lady Sleeps; Ain't No Use; Let's Spend The Night Together; Edward, the Mad Shirt Grinder.