The Jazzattack Series in Krefeld 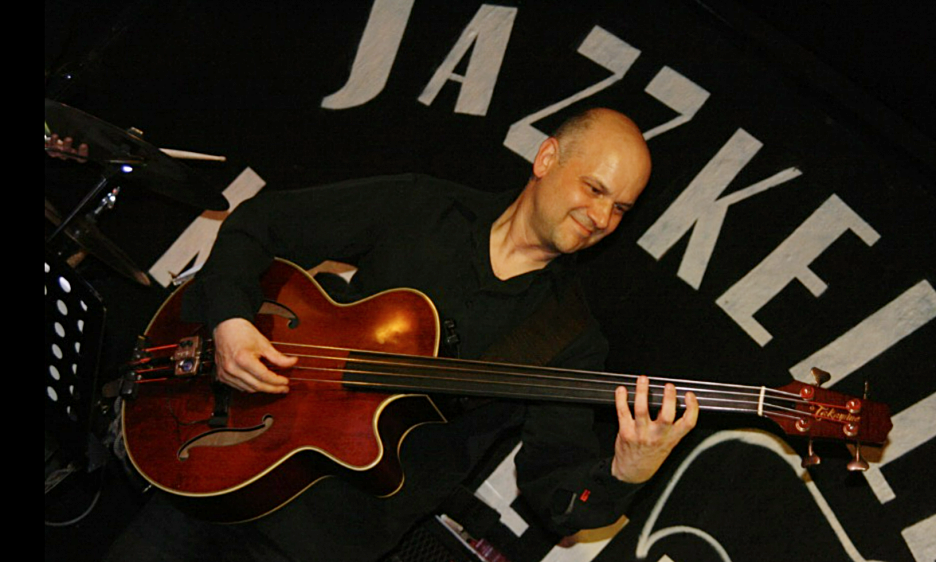 When we get people together here, it just works.
—Stefan Rademacher

Most jazz clubs have one seat or table that causes conflict. Patrons arrive early, hoping to grab this cozy corner. Other audience members glare green-eyed at that serene sweet-spot. In the Jazzkeller Krefeld, however, no such problems exist. In this murky cave in northwest Germany, every seat is tucked away. Everybody is blanketed by shadow. Attending a concert in this club is like having a jazz band slither in to join you inside a sensory deprivation tank. But without the grim spectacle of seeing their bathing suits.

So it was on March 3, when the club's Jazzattack series featured Hugo Read (alto saxophone), Martin Sasse (piano) and Michael Küttner (drums). They joined bassist Stefan Rademacher, who established the series back in 1997. "That was one of my rare good ideas," he joked after the gig. "We meet two hours before going on stage, always with different players and contrasting styles. It forces musicians to really open their ears—very wide. And that's what makes jazz."

Perhaps to prove this point, the band kicked off the show with a version of "Mixing" by Airto Moreira that was so groovy it threatened to set the audience's earlobes wiggling in the half-light. Rademacher boogied in the middle of the stage like a man who has played more than 300 gigs on that spot (he has). The volume dropped for a saxophone solo with a structured start and a squawking finish. Küttner then reeled off a characteristically kid-in-sweetshop burst.

Next up, a boppy ballad called "Song for You," by Hugo Read. It gave Martin Sasse a chance to test the Jazzkeller's piano, and he took a Monk-flavored turn with some wide-open spaces. His solo on "Sure" by Kenny Garrett, took a vastly different approach. Somehow, the band picked up the exploded melody and put it back together after the pianist had shredded the song into a billion crystal fragments.

"Tea for You" is one of Sasse's own compositions, a swing number in four-four. He took the first solo, full of riffing repartee. A bass solo then shared a darker story, with shocks and jolts and plot twists. Read's saxophone babbled and blabbed next, before Küttner's drums told some ludicrously tall tales.

This was followed by "Equality," a hard-driving piece by Hugo Read. Then came "Sweet Pain" by Michael Küttner, a song shaped by mixed emotions that generated stand-out solos. Another Read composition, "Elegy," gathered those jumbled feelings into a single stream of pretty sentiment.

More swing from Sasse came next. For his song "With You!," the pianist loomed close to the keys and didn't back off until they'd turned too hot to touch. Read's saxophone solo was accompanied by just drums, and he embraced the space to stretch out far beyond conventional boundaries of tonality. Rademacher then took a bluesy and note-bending solo. Another highlight.

Finally, Küttner lit up every nook and hideaway in the club with his composition "Hymn." First, the band conjured a barren landscape with dark clouds coagulating—until a loping, rocky rhythm blitzed through the darkness. The piano went paranoid. The bass went bonkers. The saxophone went stark-staring mad. When the candles flickered a certain way, the crowd's astonished faces flashed. It was quite a finish.

"Tonight we had four powerful personalities who compose very differently," Rademacher said. "You might not expect to them to play at the same concert, but when we get people together here, it just works."

"Maybe it's because of the environment," he mused, scanning the low-ceilinged cellar. "It's not the same when you play in a sterile space where the audience is far away. That doesn't work. You need... a cave."

I'm a 37-year-old fiction writer and music writer. I was born and raised near Manchester, UK. I now live in Germany.