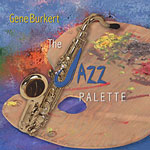 A colorful masterpiece of an album, Gene Burkert's second recording as a leader (1996's The System was the first) contains new material in the form of five originals, along with fresh interpretations of a few old standards in one fine, attention-grabbing session. A veteran musician whose credits include playing with some of the biggest names in show business (Mel Torme, Liza Minelli and Johnny Mathis), Burkert has also played with first-class jazz musicians (Poncho Sanchez, Diana Krall, Herbie Hancock, and the big bands of Bill Watrous, Bill Holman and George Stone).

In fact, Stone co-produced this project, adding one of his own compositions ("Straight Ahead") and providing the arrangement for "The Very Thought of You," an absolutely beautiful melody containing the only vocals on the album, supplied by Celena Lares.

Burkert brings together a talented group of players with impressive credentials of their own: pianist Christian Jacob, the much in-demand bassist Trey Henry, master guitarist Larry Koonse, drummer Dave Tull and percussionist Darrell Voss. This burner of an album opens up with Stanley Turrentine's signature "Sugar" with a nice alto expression from the leader. He supplies more refined alto solo work on one of his originals, "Our Pleasure," which also features a terrific guitar lick by Koonse. There's a cool jazzy rhythm and beat on "Rogue March," another Burkert tune.

Burkert takes on the tenor on the Jerome Kern's "Yesterdays," a rather fast-paced interpretation that is a bit too quick for me to appreciate. In stark contrast, however, he does a pleasant slow and mellow rendition of the samba-tinged "Gaviota." One of the best charts here is Gearge Stone's "Straight Ahead," with various stylish solo performances from the band. Expanding his range on the reeds, Burkert tackles the soprano sax on "Alikeness" and on "Wind In Time."

Burkert claims the spotlight with a truly outstanding performance on a range of instruments. Jazz Palette is a sensational recording packed full of engaging new charts, offering a different and delightful approach to often-recorded old standards.