BY MIKE JURKOVIC
January 14, 2019
Sign in to view read count 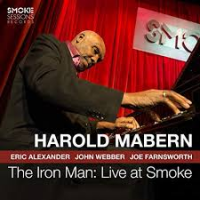 Hard-bopping pianist Harold Mabern may have made his recording debut in 1959 with drummer Walter Perkins' quintet and led his first session in 1968 for Blue Note on the soulful A Few Miles From Memphis but here he is, at 82, playing with straight-ahead, youthful joie de vivre on the story telling, life affirming, two-disc set The Iron Man: Live at Smoke.

Working as hard as ever with his long standing trio of tenor saxophonist and former student Eric Alexander, bassist John Webber and drummer Joe Farnsworth, Mabern, on this last night of an exhilarating three-week residency that saw his rep re-ascend, covers all the bases and revels in his song-filled autobiography. His signature "A Few Miles From Memphis" and "Rakin' and Scrapin,'" two full fledged, hot blooded boogies, bookend The Iron Man: Live at Smoke and the music in between never lets you down. John Coltrane gets a special nod with a sonorous, rolling read of "Dear Lord" and a robust, crowd pleasing "Mr. PC." Add to that Alexander's gifted, often biting Coltrane-inspired runs and Webber's swing-blues bass circa Jimmy Garrison and yes, as he often, if not always, is, Coltrane's in the room taking it all in.

"Nightlife in Tokyo," another Mabern claim to fame, effortlessly sways to and fro from a deceptive Oriental tinge to a grand American boogie/swing. Farnsworth keeps a tight rein on things here while Mabern and Webber carry the day. Alexander gets his licks in too and shines on the quieter "You Are Too Beautiful" and "She's Out of My Life." No one goes home disappointed and The Iron Man: Live at Smoke proofs it.

Disc 1: A Few Miles From Memphis; I Get A Kick Out of You; I Know That You Know; I Remember Clifford; T-Bomne Steak; Almost Like Being in Love; Dear Lord. Disc 2: Nightlife in Tokyo; She's Ou of My Life; How Insensitive; Mr. P.C.; On a Clear day (You Can See Forever); You Are Too Beautiful; Rakin' and Scrapin'.