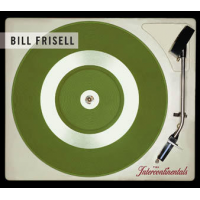 It's time to admit a bias. Anyone who covers Boubacar Traoré automatically scores points in my book. The Malian guitarist is infinitely remote to anyone outside Mali, but that isn't for any good reason except the vagaries of the recording industry. It's fitting that guitarist Bill Frisell would choose "Boubacar" as the opener to The Intercontinentals given the international flavor of the record, the omnipresence of Malian percussionist Sidiki Camara, and the way blues from Mali builds feeling and depth from simple cyclical structures. Frisell and his quintet use loops to reinforce a constant turnover; they never stray into complexity or density, and they hit the one like it's a slice of heaven. I guess they've checked Boubacar out. With eerie voice snippets and dramatic reverberant twang, The Intercontinentals also stamp it all their own.

A few words about the players and styles on this record. Obviously Frisell made a conscious choice to surround himself with an international crew (from Brazil, Mali, Greece, Los Angeles, and New York) and to pursue tunes that never stop in the same place twice. That's the main distinction of The Intercontinentals and the feature which lends it strength. Whatever traditions the group chooses to salute, purity is never part of

the equation, and that's absolutely key. And the fact that everyone plays either strings or percussion certainly flavors the sound accordingly.

In recent years Frisell has turned ever closer toward American heartland music, replacing his previous maverick self with a regular-guy country persona. To be honest, that has been a disappointing trend since it has boxed him in and withdrawn much of the color from his music. He certainly doesn't suffer from a lack of imagination, though, and it's nice to see that put to good use on this record. The country aspect never leaves the music (there's enough lap and pedal steel in the hands of Greg Leisz to build a skyscraper), but it gets a needed infusion from all angles.

Frisell matches his by now trademark lush and reverberant guitar sound with the emphatic singularity of the oud and the organic slide of the violin. "Listen" and " Good Old People" have a warm, easy tendency toward resolution. On Boubacar's "Baba Drame" Sidiki Camara adds vocals. The expectant funk of "Prociss'o" rides with harmonized Brazilian vocals and a down home bluegrass prance. The brief "Young Monk" is the only acoustic piece, a duet where Frisell's nylon string guitar supports trilling, accented minor melodies on Christos Govetas' oud. An oddly symphonic blues drives "Eli," only to wind down with the record's sad, pared-down closer, "Remember."

In the end the buoyancy of a multifaceted band, eclectic voicings, and creative choice of material render The Intercontinentals an unqualified success. I'd rather Frisell replace his Americana obsession with something a little more interesting; this recording certainly represents a huge leap in the right direction.