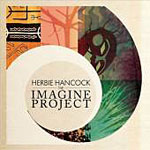 Intersecting with the pop world is nothing new to Herbie Hancock. Collaborating with legendary trumpeter Miles Davis on the early nexus of jazz and rock, In a Silent Way (Columbia, 1969), the keyboardist scored his own fusion hit with the funkified Head Hunters (Columbia) in 1973) and, a decade later, was on the cutting edge of techno/electronica with Future Shock (Columbia, 1983). More recently, Possibilities (Hear Music, 2005) enlisted artists including Christine Aguilera, Paul Simon and Sting for an unmistakable pop album that still retained a subtle jazz undercurrent in Hancock's own unmistakable pianism.

The Imagine Project builds on Possibilities by placing big names like Dave Matthews, Pink and Seal alongside a cream-of-the-crop collection of international artists who, while representing their individual musical cultures, find common ground in every corner. Brazil's Céu, Ireland's The Chieftains, Malian rockers Tinariwen and Bengali-born sitarist Anoushka Shankar are but a few of the performers Hancock and producer Larry Klein recorded around the world, on a collection of songs—often iconic and part of a collective zeitgeist—that share common themes of togetherness, peace and global responsibility.

Like Possibilities, this is a pop record, with only the occasional hint of jazz. Bob Dylan's "The Times They Are a Changin'" is sung with subtlety and implication by Ireland's Lisa Hannigan—with traditional contextualization from fellow Irishmen The Chieftains—but Klein's spare bass and Alex Acuña's percussion turn things more cross-cultural, as guitarist Lionel Loueke's jazz proclivities and Afro-centricities blend with Hancock during an extended trade-off section. Recorded in Mumbai, "The Song Goes On" teams Hancock and saxophonist Wayne Shorter with some stunning locals, including sitarist Anoushka Shankar; a fiery original sung by Chaka Khan that features some the disc's most spirited improvisational interplay.

Africa and Jamaica find common ground, with Chicano rockers Los Lobos in the middle, turning Tinariwen's groove-heavy "Tamatant Tilay" into a medley with reggae king Bob Marley's "Exodus," while James Morrison's version of Sam Cooke's prescient "A Change Is Gonna Come" is another highlight, as much for Hancock's astute injections as it is the British singer's impassioned delivery. Radio-friendly it may be, but The Imagine Project remains an album that couldn't have been made anyone but Hancock, an artist who intuitively understands where diverse musical spheres—considered disparate by so many—can seamlessly intersect.