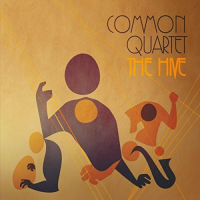 The Common Quartet is a relatively unknown group of players from the Brooklyn, NY jazz community presenting their debut album entitled The Hive delivering an audacious set of modern jazz original tunes from members of the band and stellar interpretations of two standards. Performing in the culturally-rich neighborhood environment of Bedford-Stuyvesant for over three years every Monday, the four friends forged a musical bond that have led them to the recording studio to document much of the music they have been performing, for the jazz world beyond Brooklyn to hear and enjoy.

Saxophonist Seth Trachy from the heart of the Blue Ridge Mountains, guides the group consisting of veteran pianist Nitzan Gavrieli, Chilean bassist Pablo Menares and Denver- raised drummer Alex Wyatt forming the core of the quartet. Also, appearing as special guest on a couple of tracks is veteran guitarist Steve Cardenas of the Paul Motian Octet, briefly augmenting the band to a quintet format.

The album leads off with a Trachy original with "Zam" featuring the saxophonist and pianist leading the way on a nice modern romp followed by a more subdued Menares piece entitled "Lem," which slows down the tempo on one of the softer tunes of the album. Piano man Gavrieli offers two pieces ("Gemmi," and "Traffic Song") of distinctly different textures but with one common thread that features the percussive flair of drummer Wyatt throughout.

Presenting a couple of compositions of his own, drummer Wyatt's brush work and warm bass lines from Menares set the stage for the saxophonist to surge to the front line on "Don't Hide," while the drummer's other contribution, "Empty Castle" provides one of the better moments of the album which, also features guitarist Cardenas on excellent complimentary string work.

The group takes on John Coltrane's "Lazzybird" and puts their own stamp on the standard providing one of the finest treatments of the classic around. Interestingly enough, the same can be said of the finale piece of the album, another classic standard this time, from Charlie Parker as the recording closes with a hard-driving version of "Big Foot." An uncommonly terrific debut from the Common Quartet as The Hive so ably demonstrates. A solid foundation from which to expand boundaries and obtain critical attention. Seth Trachy and crew have something here that Brooklyn may not contain much longer, well done!