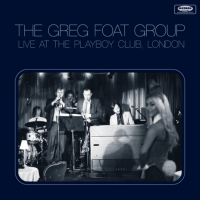 Compare and contrast the cascade of notes from Greg Foat's electric piano with albums featuring keyboardists such as Dave MacRae or Keith Tippett. This set's opener, Erni Clark's obscure minor classic "By The Grace Of God, I Am" recalls a feeling, intentionally similar, to the heady days of the late 1960s and early 1970s which Foat finds most appealing. The short bridging track "Exodus Interlude" with its famous theme and barely a minute in length leads into "Mr Minor" introduced by an obligato bass line working up into an insistent groove embellished by echo-laden brass reminiscent of the early use of echo by Soft Machine. Here the tenor saxophone is augmented to wild degrees by reverberation creating a hypnotic effect.

"Blue Melody" has brass laying down a serene backdrop with piano overlaid and is a gorgeous tribute to its composer, the late folk rock legend, Tim Buckley. Foat's own composition, the feisty "Ingen Reklam" (which in Swedish means "No Advertising") is a totally absorbing track, replete with echoey brass and a groove-laden beat.

The haunting arrangement of the Alan Hawkshaw and John Rostill tune "Madrid" sends a veritable chill down the spine, the brass taking up the melody line followed by a sumptuous flugelhorn solo from Trevor Walker and a robust tenor solo from Rob Mach. Briskly succeeded by another library piece, Keith Mansfield's "Funky Fanfare," it becomes apparent that this group readily thrives on the musical genres which others eschew. On this brilliant track especially, the Foat live sound seems almost to stray into Les McCann / Eddie Harris Swiss Movement territory and Foat's electric piano work here is lithe and vital.

As with the MP3 download, this CD release is accompanied by two bonus tracks, but these are omitted, presumably for reasons of space, from the vinyl release. The first of these extras is a stunningly good version of Tubby Hayes' 1960s classic "Finky Minky," adorned by fiery organ by Foat and some appropriately meaty tenor saxophone. The final track is "Papa's Got A Brand New Pigbag" by the 1980s British post-punk band Pigbag. The groove here is so intense that it would be challenging for anyone hearing this to remain still.

This is the first live music to be recorded at London's Playboy Club in over forty years and therefore represents something of a historic milestone. Foat's third truly excellent album, effortlessly injects the life and soul back into contemporary jazz.

About The Greg Foat Group