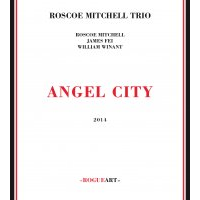 Throughout his career Chicago multi instrumentalist and composer Roscoe Mitchell has forensically examined two key polarities. More than most he has focused on the tensions between sound and silence and composition and improvisation. On Angel City, a continuous 55-minute opus recorded over two days in 2012 at Mills College in Oakland where Mitchell is professor of music, the interaction between those opposites defines the new work. Alongside Mitchell, fellow faculty members reedman James Fei and percussionist William Winant prove able interpreters and investigators.

At times the piece recalls the feel of some early AACM sides, Mitchell's own Sound (Delmark, 1966) comes particularly to mind, in the use of wide open spaces, conversational exchanges, the absence of rhythmic movement, and the constantly shifting instrumentation. This last means that it's not only ego that is subsumed into the execution of the score, but also sense of individual presence. Further confounding those who like to know the source of the sounds, Mitchell also plays percussion as well as reeds, while Fei adds electronics to his arsenal. Thus even the most assiduous student might be hard pushed to identify any of the participants or even their number, in what is either carefully controlled notation or tightly disciplined improv, or most likely a combination of both.

Mitchell and Fei are masters of saxophone extremes, and these abound. Extended passages of circular breathing form part of both men's armory, (Fei once employed the technique solidly for over an hour to realize saxophonist Anthony Braxton's Composition 247 (Leo Records, 2001)), and they press the skill into service here to deliver long sustained tones and drones. Similarly Winant's role primarily revolves around timbre and texture rather than momentum, and he wields a full range of implements including tuned percussion such as tubular bells and marimba.

Initially the piece proceeds as a series of episodes separated by silence, some percussive, others featuring bickering horns. Later at around the 25 minutes mark contrapuntal woodwinds and chimes introduce an impressionistic interlude, which makes explicit the composerly input. Towards the close Mitchell's alto saxophone skirl, joined by a second squealing alto, promises a crescendo of sorts, though when it comes the conclusion is as gentle and non-emphatic as much of what precedes it. For those who make the effort Mitchell creates a raft of strange and mesmerizing soundscapes, but the journey may be too daunting for the casual listener.