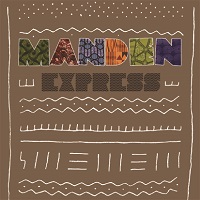 The name Manden Express derives from the ancient Manden Empire—better known today as Mali—and its music is an intoxicating fusion of traditional and contemporary West African sounds, Afrobeat and grooving jazz-rock. This EP, its debut release, successfully captures the essence of the Dublin-based septet's thrilling live shows -dance-fests that have made Manden Express a crowd favorite at all manner of Irish music festivals, including Bray Jazz Festival and Down With Jazz.

The story really began in 2001 when Paul McElhatton journeyed to West Africa to study percussion. Subsequent trips were crowned in Burkina Faso in 2006, when McElhatton came under the spell of the harp-like kamele n'goni under griot and balafon master Idrissa Diarra. Further West African pilgrimages and more serious study would follow. The wheels were well and truly greased and the next move for McElhatton was to jack in the day job and recruit like-minded musicians. Manden Express' first concert duly took place in 2013 and the band hasn't looked back since.

Needless to say, rhythm provides the backbone of the music, with Brian Lynch's djembe (goblet drum) and drummer/percussionist Cote Calmet in powerful harness from the first beats of the hypnotic "Djigui." Peruvian Calmet—one of the most versatile drummers in Ireland—brings something of the complex Afro-Latin vibes of his sextet Phisqa, but on the whole the pulsating grooves are inspired more by the village, Wassalou styles typical of Omou Sangare and the late Ramata Diakité.

Dominguez is to the fore on the charging "Taureg Foli," his coruscating chops evoking the electric desert blues of Tinariwen and Bombino. The Burkina Faso folk tune "Fasso Denou" is equally infectious, with a delightful call and response vocal led by Garrett over pulsing acoustic and electric grooves. The up-tempo polyrhythms and singing electric guitar of "Safo Safo" evoke early-period Santana; McElhatton's improvised n'goni passage and an extended vocal chant briefly redirect the music but electric guitar and blistering hand drums have the final say in a rousing finale.

Having conquered Ireland with its adrenaline-pumping, feel-good African rhythms it's difficult to imagine Manden Express not going on to do the same to audiences far and wide. There is one complaint, however, and that's simply that this vibrant thirty-minute EP leaves you wanting a whole lot more.