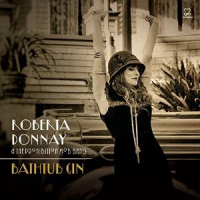 Roberta Donnay is a Jazz Age preservationist, guardian of Depression-era sounds, and extender of traditions, but her music isn't covered with cobwebs or dated in any way. On Bathtub Gin, this singer-composer puts a new coat of paint on the songs of the '20s and '30s, contributes originals sympathetic to the sounds of those times, and conjures thoughts of life during prohibition.

Across fifteen tracks, Donnay and her group—the aptly-titled Prohibition Mob Band—deliver snappy statements, sly songs, roaring numbers, and relatively subdued sounds. Everything listeners have come to expect from this music is present: a swinging rhythm section, pithy solos, muted brass exhibitionism, tom breaks, vocals with a dose of sass and humor, the spirit of the blues, gutbucket horn asides, and intelligent songcraft are all here for the taking.

This group plays with a sense of verve, regardless of whether it's covering timeless gems ("Bye Bye Blackbird"), period classics ("Kitchen Man"), or original music ("Horizontal Mambo"), but it also knows how to work with emotional weight ("If You Want The Rainbow (You Must Have The Rain)" and "Smile"). Donnay proves to be a compelling front woman, capable of working a coy line, a ribald number ("Kitchen Man"), or an entrancing, country-laced beauty ("Shake Sugaree") with equal success; pianist John R. Burr shows himself to be a strong soloist; the blustery brass men—trumpeter Rich Armstrong and trombonist Wayne Wallace—turn up the heat; multi-reedist Sheldon Brown adds color with his clarinet and zest with his saxophone work; and the rhythm team of bassist Sam Bevan and drummer Michael Barsimanto serve as the power unit for the band. Several guests drop in—most notably, vocalist Nicolas Bearde ("Just What The Doctor Ordered") and chromatic harmonica player Steve Malerbi ("Smile")—but it's the core band that captivates.

Exploring the music and spirit of this bygone era is clearly a labor of love for Roberta Donnay. She injects enthusiasm into her chosen material, shows respect for her musical primogenitors, and conjures thoughts of a different time with Bathtub Gin.

Bathtub Gin; Why Don't You Do Right; If You Want The Rainbow (You Must Have The Rain); Wake Up And Live; Just What The Doctor Ordered; When I Take My Sugar To Tea; Shake Sugaree; Throw Your Heart (Over The Fence); (We've Got To) Put The Sun Back In The Sky; Happy Feet; Bye Bye Blackbird; Kitchen Man; Smile; Horizontal Mambo; I Gotta Right To Sing The Blues.