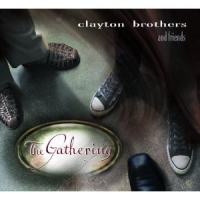 The Clayton Brothers—John Clayton on bass and Jeff Clayton on reeds—have been playing together for over 30 years, either in their small groups or in the large Clayton-Hamilton Jazz Orchestra, formed in 1985 in partnership with drummer Jeff Hamilton. In small contexts, they have specialized in post-bop swing with a touch of funk, while the critically acclaimed big band is known for its crisp, intricate arrangements. The brothers have recorded many CDs in both configurations and traveled worldwide.

In The Gathering , they decided to augment their usual quintet, currently including John's son Gerald Clayton on piano, trumpeter Terrell Stafford and drummer Obed Calvaire. They also bring in trombonist Wycliffe Gordon and vibraphonist Stefon Harris on selected numbers. The purpose, according to John, is further "harmonic exploratory of hard bop, ballads and blues all with the funk infusion of flavor." This goal has been well achieved through a varied array of songs—two classic jazz standards and originals, mostly by Jeff.

Two of Jeff's compositions in contrasting styles are especially impressive. "This Aint Nothin' But A Party," starts with the piano and band in a funky, Les McCann-type mode before the alto contributes a jubilant wail, and the trumpet soars into the stratosphere. "Tsunami," on the other hand, is a tone poem with the band evoking a catastrophic occurrence—jangling piano, torrential drums and shrieking alto contributing to the cry of chaos.

The guests get several opportunities to shine; specifically, Gordon's trombone takes a jaunty walk in the park with the rhythm section in Jeff's "Coup de Cone" and, on "Simple Pleasures," the warm exchanges between Harris and Gerald Clayton epitomize the song's title. In the Billie Holiday classic, "Don't Explain," with their sensitive blend of piano and bowed bass, father and son deliciously capture the song's subdued joy.

With The Gathering, the addition of additional players pays big dividends.