By John Eyles
January 18, 2013
Sign in to view read count
In December 2011, French-Canadian alto saxophonist François Carrier 2 was approaching the end of a six-month sabbatical visit to London, sponsored by Conseil des arts et des lettres Québec. On December 6, Carrier played a gig at The Vortex to launch his album Inner Spire (Leo, 2011) recorded the previous year in Russia with his long-time drummer Michel Lambert and Russian pianist Alexey Lapin; Lambert had flown into London for that launch gig. The next day, December 7, Carrier and Lambert played what was to be the last Carrier gig of that London sojourn, at St. Leonard's Church, Shoreditch. The duo of Carrier and Lambert shared the bill with a trio of active London improvisers, flautist Neil Metcalfe, guitarist Daniel Thompson and bassist Guillaume Viltard. As always, Carrier recorded the entire gig, a recording that resulted in these two separate albums which make fascinating listening back to back.

The trio of flute, guitar and bass was playing together for the first time at this gig. The thirty-seven minutes of music on this album represent the entire trio performance from that evening, consisting of the twenty-seven minute title track plus a shorter end piece, "Vimeth." The album runs for long enough to feel satisfying rather than that we have been short-changed. All the music played by the trio was improvised. On the longer track, the three soon gel, creating music that sounds free and natural. It is not an equal three-way exchange, but each instrument has a vital role to play. As so often with trios that lack drums, their absence seems like a release, and imbues the music with a refreshing lightness. Viltard's bass underpins the music, meaning it is less active than the flute and guitar which play together more.

Metcalfe's flute is the dominant voice of the trio, soloing almost continuously with great fluency and a seemingly endless supply of melodic phrases and fragments. In his hands, the flute achieves the freedom of birdsong, creating music that flows. The acoustics of St. Leonard's church showcase the music beautifully, giving it warmth and richness.

On the shorter track, Metcalfe is just as impressive, while Viltard is more to the fore as the pair complement each other well; Thompson's guitar takes a supportive role, eloquently filling any gaps without unduly distracting or intruding. Altogether, a fine example of three-way improvisation.

This album recorded the start of something: since the gig, the trio has remained together and performed at many venues in and around the London area; deservedly, it has bookings well into the future. 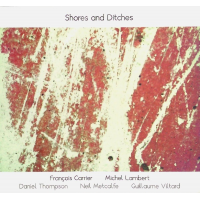 On Shores and Ditches (a great title, given that it was recorded in Shoreditch!), the above trio is joined by Carrier and Lambert, with various subsets of the five players performing across the album's six tracks; they include one quintet piece, one sax-bass-drums trio, three Carrier-Lambert duos and, finally, a solo performance by Carrier. As above, all of the music was improvised. The changes of format and line-up give the album variety and freshness, but its most noteworthy aspect is that Carrier appears on every track. After listening to the album, his alto sax is the sound that lingers in the memory longest and the one that cries out to be heard again. As so often, his playing sounds relaxed and natural, as if he has all the time in the world. Despite Carrier playing for the majority of the album's fifty-six plus minutes, he never sounds as if he is marking time or lost for ideas. Instead, he generates a steady stream of coherent music that is easy to listen to repeatedly, giving something new every time.

Fortunately, the other four musicians here are a match for the saxophonist. After their years together, Lambert is clearly on Carrier's wavelength and matches him every step of the way like a shadow—an example of a perfect symbiotic relationship. On the trio piece, Viltard manages to fit into that tight-knit partnership, finding an unobtrusive role which complements the other two and enhances the overall sound of the music, no small achievement. In the quintet, Metcalfe is just as impressive as on the trio album, with Lambert's drumming adding an extra dimension; for much of the time, Carrier allows the flautist space to solo freely but, after he joins in midway through, the two match one another in a taut dialogue that makes gripping listening.