David Dower and Matt Fisher: The Frog, The Fish and The Whale

BY BRUCE LINDSAY
September 24, 2016
Sign in to view read count 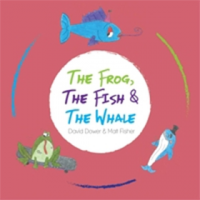 The young London-based duo of pianist David Dower and percussionist Matt Fisher makes its debut with The Frog, The Fish & The Whale. It's a striking set of Dower's compositions (with arrangements by him), influenced by the duo's love of jazz, classical and contemporary musics. Additional musicians join the pair on three tracks, with vocalist Lauren Lucille coming in on "Big Balloons."

By Dower and Fisher's own admission, this is ..."original music with a cheeky grin." Thankfully the cheekiness doesn't lead to a selection of cod-trad cliches or attempts at comedy jazz—the pair are too perceptive and talented to fall into those traps. The opening section of "Go To Sleep, Rybs" is probably the most overly-cheeky music on offer, energetic Neil Cowley Trio style phrases with Fisher displaying his best rock-drummer aggression. But this initial energy soon calms down and leads on to a quieter, flowing close.

"Kelsie"—a piano/percussion duet dedicated to Dower's dog—contrasts Dower's fluid piano phrases with Fisher's muscular drumming. It's easy to imagine the dog's playful energy. "Lyon" is a delightful contrast to the opening track, with added strings. It's a graceful, meditative, tune to begin with but Fisher's percussion becomes more urgent and it becomes punctuated with louder, more dramatic, flourishes from Graham du Plessis' cello and Sam Parratt's viola. "The Frog, The Fish And The Whale" is another playful duet, while "Dad" is a pretty and engaging tune featuring du Plessis and Parratt.

Vocal number "Big Balloons" adds Nick Di Gregorio's guitar to the rest of the musicians. Despite featuring the largest ensemble, the song is one of the most delicate and gentle tracks on the album. The musicians play with subtlety and with sympathy for the lyric. Lucille's sweet and expressive voice gives added poignancy to the words.

The six songs on The Frog, The Fish & The Whale demonstrate Dower and Fisher's wide-ranging musical prowess. Strong melodies, beautiful harmonies and rhythmic drive make for an impressive debut: next time around it would be great to hear an expanded role for Lucille and the other guest performers.

Kelsie; Lyon; The Frog, The Fish And The Whale; Big Balloons; Dad; Go To Sleep, Rybs.

Title: The Frog, The Fish and The Whale | Year Released: 2016 | Record Label: Self Produced