Home » Jazz Articles » Freddy Cole: The Dreamer In Me

Freddy Cole: The Dreamer In Me

By Marcia Hillman
December 6, 2009
Sign in to view read count 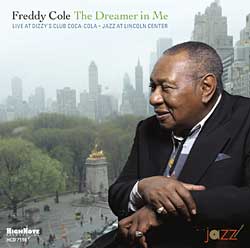 This CD ably captures Freddy Cole in a live set at New York''s Dizzy's Club Coca Cola, from February 2008. Cole sings his way through a selection of non-overdone material, accompanying himself on piano on five of the tracks (the remaining piano chores delightfully handled by John DiMartino). The rest of the band includes Jerry Weldon on tenor saxophone, guitarist Randy Napoleon, bassist Elias Bailey and drummer Curtis Boyd (the latter three his usual touring group).

Cole is an engaging and accomplished performer, telling musical stories in a warm, gravelly voice (sometimes reminiscent of older brother Nat) and, according to the liner notes, not being committed to a 'set' set, instead taking his song selection direction from his audience. This accounts for a relaxed, spontaneous feel. His pacing is impeccable as he goes from an up-tempo swinger like opener "I Will Wait For You" to "I Was Wrong," a bluesy Benny Carter ballad on which Weldon delivers some soulful playing.

This kind of attention to contrast of material and tempo is apparent throughout the performance. Cole's repertoire is vast but he chooses well, selecting from writers such as Cole Porter, Peggy Lee, Sammy Cahn, Jimmy Van Heusen and the title tune, with both music and lyrics by Johnny Burke, a song originally recorded in 1958 by Nat. Other tracks worth noting are the rouser "On The South Side Of Chicago," with some wailing sax work, and "What Are You Afraid Of?," where the mischievous side of Cole's personality come out. Bailey and Boyd are an expert rhythm section and Napoleon shines with "More Than Likely" and "You're Sensational."

For over 50 years, Cole has known how to make an audience and a listener feel comfortable and the know-how is all here on this wonderful CD.

I Will Wait For You; I Was Wrong; Send For Me; I'm Making Believe; You're Sensational; Where Can I Go Without You?; More Than Likely; You're Bringing Out The Dreamer In Me; On The South Side Of Chicago; What Are You Afraid Of?; What Now My Love?.