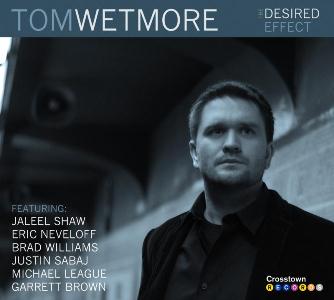 Here's a sophisticated and hip debut from up-and-coming pianist Tom Wetmore. His studies with well-noted composer/improviser Ran Blake and influences that cite Brad Mehldau and Stevie Wonder speak volumes about his openness to create music that is versed in classic jazz but stretches beyond its confines. Since 2005 he's been thick in the New York City music environment, whether performing, writing or leading his own traditional jazz trio. But his alternate ego is plugged in and materializes with The Desired Effect, featuring Wetmore exclusively on electric keyboard with a rousing sextet that consisting of rhythm section, saxophone, and two lead guitars.

The strength of the recording doesn't rest on the shoulders of obligatory jazz standards but in Wetmore's own compositional merits (a finalist for the ASCAP Young Composers award) and his ensemble's synergy. Contemporary concepts are realized via charts that are vigorous and funky enough to hold a sweet groove in "Good and Plenty," where simultaneous yet contrasting guitar riffs (àla Kurt Rosenwinkel) syncopate with a frosty vamp that allows the musicians to travel.

While the absence of acoustic piano provides memories of Herbie Hancock's 1970s electric keyboarding, it's not all about the groove, as witnessed in the mellifluous "A Blessing," where alto saxophonist Jaleel Shaw provides his usual dramatic flair. Wetmore's playing is particularly impressive here, with empathetic accompaniment/soloing, and he continues to show prowess in "Falling" and "The Rub," where elements of rock and jazz converge.

There's nothing overtly earthshaking, but The Desired Effect does make an impact. As the title might suggest, it succeeds in providing music that is both enjoyable and identifiable, and from a fresh voice full of potential.