By MARK CORROTO
December 24, 2009
Sign in to view read count 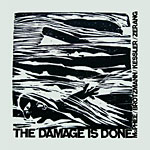 As they have in the past while touring with the Tentet, they step away and perform in this more intimate lineup. This quartet has released two previous recordings, Tales Out Of Time (hatOLOGY, 2004) and Guts (Okka, 2007), with The Damage Is Done's two discs recorded live at Alchemia in Krakow, Poland in March of 2008.

While the players can (and do) perform volatile energy jazz here, their preference is for music that's dissectible enough for the players to be distinguished in parts and direction.

The obvious reference point here is the legend of Albert Ayler and his brother Donald. Brötzmann has never shied away from his admiration for free jazz's holy ghost. With Brötzmann on tenor and McPhee sporting the trumpet role, the attention to Ayler can be heard on "With Charon" and the title track (all 30-plus minutes). Brotzmann and McPhee's stamina, both nearing 70, is impressive. The pair delivers an onslaught of energy with a relentless attack, the only pause being for Zerang and Kessler's solos. With that, the pace slows, allowing Brötzmann to paint from a different palette. This gentler approach acts as a collection point before the music again spreads its energy patterns outward.

Kessler and Zerang open "Alchemia Souls," with itchy bowed bass and sound effect brushes on drums. Brötzmann enters, playing a persistent tarogato before McPhee's twitchy alto joins. The rhythm section maintains the energy through constant motion. The more affable music making here comes at the urging of the rhythm section. Slowing down the pulse or playing with mallets coaxes the horn players to decelerate and clarify the sound.

The breadth and power of these four players comes through with an exhaustive clarity in this crisp and vigorous live recording.

CD1: The Damage Is Done; Alchemia Souls. CD2: A Temporary Trip; With Charon; On The Acheron; Into The Hades.