Gary Husband: The Complete Diary of a Plastic Box 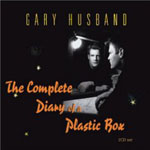 One of the biggest surprises for those who thought of Gary Husband as a drummer was his keyboard work on guitarist John McLaughlin's recent 4th Dimension tours (Fall, 2007/Spring, 2008) Still, those in the know are familiar with Husband's double life on albums including The Things I See (Angel Air, 2004), (Jazzizit, 2004) and A Meeting of the Spirits. But it all began with Diary of a Plastic Box, an album Husband crafted over a period of five years in hotel rooms, dressing rooms and tour buses on the road with Allan Holdsworth, Billy Cobham, Jack Bruce and Level 42. Deleted almost immediately after its 1999 release, in response to fan demand The Complete Diary of a Plastic Box, expands the original CD into a full two-disc set.

Unlike most expanded albums, what's most remarkable about Diary is that it actually feels more complete as a double-disc set, with nearly two hours of multi-tracked explorations into the possibilities of one man, one Korg M1 Workstation and one set of headphones. Largely a set of miniatures with only three tracks exceeding five minutes, it's effectively a travelogue of life on the road, a chance to hear Husband, who was largely touring as a drummer at the time, emerge as a talented keyboardist and writer. The album's all-electronic complexion may put off the purists, but this is still a "playing" album— every layered track was performed in real time, with no quantization and the only editing an aid to connect each disc's twenty songs.

Allan Holdsworth's harmonic spirit looms large on tracks like "Lonely Room," the high energy "Jolt" and equally fiery "Rooftop of Innsbruck"—all brief ideas that could easily have been expanded and fit on Holdsworth albums like Atavachron (Enigma, 1986). Equally, the late Joe Zawinul also figures into the equation. While the world music component of Zawinul's music is hard to find on Diary and Husband's textures are of his own design, it's hard not to feel the shadow of Zawinul's innovative synthesizers orchestration on tracks like the cinematic "Glaciers" and "Deco/Yesterday Story," the latter a ballad with a softly implied groove.

In 1999, Diary was a calling card for Husband the keyboardist and composer. But the rhythmic aspects and knotty themes that pop up throughout are inventions that could only come from someone for whom rhythm is an equally important piece of the overall puzzle. Rather than thinking of Husband's careers as drummer and keyboardist as two separate entities, it would be better to think of them as a single, integrated musical interest. With a strong sense of melody, groove and texture, The Complete Diary of a Plastic Box is a welcome return of an album that should have received more attention at the time and, in this new and improved expanded edition, deserves to draw attention to Husband as a complete musician, neither just a drummer or a keyboardist.