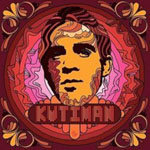 Israel-reared DJ, multi-instrumentalist and composer Kutiman [Ophir Kutiel] merges a contemporary mindset with the sounds and styles of funk and psychedelic lore throughout this melodically-rich album. A highly listenable party endeavor, you may either dance the night away or just sit and take it all in, as good vibes rule the roost here.

Kutiman incorporates James Brown and Sly Stone type funk beats, complete with sinewy wah-wah guitar licks and popping backbeats. In various regions of the disc, the artist employs broad and, at times, cheesy synth lines to round out many of these catchy hooks. It's a rock solid mix all right, also featuring softly textured interludes and groovy horn parts.

On "Once You're Near Me," the Funk'n'stein horn section proclaims a sense of jubilance atop the leader's corpulent electronics maneuvers, where the musicians map out an affable motif, enhanced by female backup singers. Kutiman intersperses a Motown vamp into select works, also summoning up notions of classic Isaac Hayes, all extrapolated with a retro/new music kind of vibe. Kutiman's game-plan is acutely focused and wondrously orchestrated. He rejuvenates 1960s and 1970s-era hip-ness with an outwardly aggressive mode of delivery that all stacks up rather poignantly.

Bango Fields; No Reason For You; Take a Minute; No Groove Where I Come From; Losing It; Skit; I Just Wanna Make Love To You; Chaser; Once You're Near Me; Escape Route; Trumpet Woman; Music is Ruling My World; And Out.