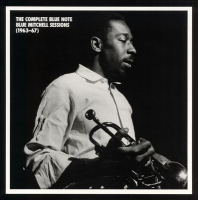 Those of you that are longtime jazz fans, take a few minutes and see how many jazz trumpeters you can name in the next minute. All done? I'm sure many of you remember Miles Davis, Lee Morgan, Louis Armstrong, and Buck Clayton, just to name a few. Now, how many of you mentioned the name of Blue Mitchell? This trumpeter's greatest success came during his memorable stay with the Horace Silver Quintet during the early '60s, however his first dates as a leader for Riverside and subsequent work for Blue Note, the topic of discussion here, would mark him as one of the finest players of his generation.

Up to now it was easy to get most of Mitchell's work on CD, however it took those astute moguls at Mosaic to assemble for the first time all of the trumpeter's prime Blue Note sides. The Complete Blue Note Blue Mitchell Sessions:1963-1967 is a substantial 4CD/6LP boxed set that presents the original albums Step Lightly, The Thing To Do, Down With It, Bring It Home To Me, Boss Horn, and Heads Up. A few of these albums have been available on CD, yet the pick of the lot is just now being issued on disc for the first time.

Things get underway with the 1963 session Step Lightly which was unissued at the time, only finally surfacing on vinyl in the late '70s. The presence of Joe Henderson and Herbie Hancock make this more than your average affair. The tunes are choice, the arrangements neat and clever, and the playing by all is quite fine. Unfortunately, Mitchell would have to wait until 1964's The Thing To Do to make his Blue Note debut. Of course, this was not an unfavorable thing considering how momentous this occasion would prove to be. Jimmy Heath would supply a few of his choicest tunes and pianist Chick Corea would turn heads with some of his finest early work. In addition, Mitchell's "Fungi Mama" would go on to become a jazz standard.

The next two dates, Down With It and Bring It Home To Me would continue in a similar fashion with Heath contributing tunes and tenor saxophonist Junior Cook sharing the front line with Mitchell. In fact, the sonority and articulate phrasing the two achieve is worth giving a special listen to after spinning these sides a few times through. Pianist Harold Mabern is also a special contributor to the later session.

Up next, we get one of Mitchell's finest recorded achievements in the 1966 album Boss Horn. Fronting a seven-piece group with charts arranged by Duke Pearson, Mitchell covers a good deal of ground and makes some highly lyrical and cogent statements of his own. Chick Corea brings in his two finest compositions, "Tones For Joan's Bones" and "Straight Up and Down," and both receive definitive performances. Mitchell's take on "I Should Care" also proves to be one of his finest solos on record.

The closing session, Heads Up, also finds Mitchell in front of a large group with tunes and arrangements by Pearson, Heath, and Melba Liston. Once again, the charts and talented crew make way for a highly memorable album that should have garnered much more attention than it did upon release.

Those familiar with Mosaic's approach will not be disappointed with the excellent sonic treatment, the wealth of Frank Wolff session photos, and Bob Blumenthal's insightful commentary. It all adds up to a powerhouse package of sophisticated hard bop that is only available through mail order.