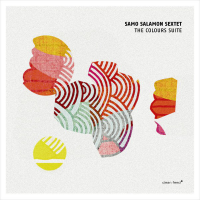 Slovenian guitar ace Samo Salamon fronts a European ensemble akin to one of those legendary all-star jazz summits, but of course these colorific works veer off into an experimental wonderland of improvisation with split-second paradigm shifts amid the ensemble's synergistic discourses. Nonetheless, the respective musicians are at the top of their game here, as Salamon arranged for drummers Roberto Dani and Christian Lillinger to generate the seismic currents by staying in synch but not necessarily executing the same patterns.

It's an ambitious live set culled from the Ljubljana Jazz Festival. Each piece frames or intimates a distinct color and given the diverse instrumentation, the frontline renders a polychromatic outline throughout. Whether its Achille Succi dishing out deep bass clarinet counterpoint and soaring via windblown lines or Salamon's ripping single notes, the band pulls out all the proverbial stops on a recurring basis. They'll temper the proceedings and spark rebirth-like maneuvers into these works with dynamic free-jazz exchanges and off-kilter detours. It's an album that wavers between asymmetrical cadences and Salamon's lyrical unison choruses with saxophonist Julian Arguelles and Succi.

"Green" is based on fervent exchanges and a succinct yet complex odd-metered unison motif, featuring bassist Pascal Niggenkemper's electronics treated arco bass solo in concert with a touch of angst and alternating storylines where the band traverses several disparate paths; although Succi goes on a rampage above a maddening pulse during "Brown." The final track "Grey," is an introspective work, accentuated by the soloists' subdued exchanges, signalling imagery of a calm- before-the-storm type scenario, shaded by Arguelles' peek-a-boo like phrasings. Hence, the album ends on what may appear to be a cool and cloudy day, following the ensemble's radiant efforts and highly energized modus operandi. Indeed, it's one of Salamon's most compelling musical statements to date.