By Doug Collette
November 6, 2022
Sign in to view read count 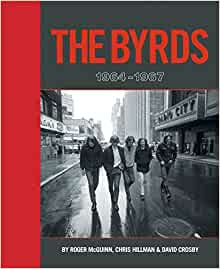 In its size, weight and length, The Byrds 1964-1967 is the prototypical coffee table item/gift book. But even as the comparatively narrow time frame it covers would seem to belie the heft of nearly nine pounds within the eleven by thirteen-inch hardcovers, its team of curators headed by award-winning writer, researcher, and music historian Scott Bomar, achieves a much greater purpose: positing the ever-changing Byrds as metaphors for the rapid passage of that halcyon era of the sixties in which the band flourished.

In picturing the group metamorphosing from the clean-cut likes captured on pages four through eight to the exotic hirsute figures on stage at Monterey Pop in 1967, the often-uninterrupted string images of the band that comprises the bulk of the space in the four-hundred some pages seem to take on a lightning-fast life of their own. Yet that's wholly in keeping with the artistic evolution of a group that seemed to evolve in quantum leaps from the chiming guitars and soaring harmonies of their early folk-rock of "Turn Turn Turn" to the experimental psychedelia of "8 Miles High" just a year later.

The latter number is especially crucial in the progression of the Byrds as it marked the last significant contribution to their music from Gene Clark. The most prolific songwriter of the original quintet, he was also the most naturally photogenic, as shown here in multiple shots, especially those of the group in performance: as on page one-hundred sixty-seven, flanked by the guitarists in a perfect symmetry, he appeared the embodiment of the "Mr. Tambourine Man" of their initial Dylan-penned hit (such an eye-catcher might well have taken the place of the anonymous black-and-white picture on the front cover).

Roger McGuinn, David Crosby and Chris Hillman are oddly circumspect in their running commentary as it accompanies the plethora of photos in The Byrds 1964-1967 (many of which. are previously unseen and, like the color portrait in silhouette on page two-twenty-eight, hint at the comparison to The Beatles in their heyday). But there is recognition of their late band mate's superior contributions to the reunion effort of 1972 even as, in that same section, McGuinn (now sans his once-famous granny glasses) blithely dismisses the later lineups of the Byrds.

The flippant insensitivity of that comment, in line with the short section devoted to the nineties' collaborations of the aforementioned three, only highlights the absence of content present devoted to a major portion of the group's history (see Johnny Rogan's definitive Timeless Flight books for those details). Of course, as reiterated somewhat repetitiously by Patrick Cleary in his "introduction," the fundamental chronology of The Byrds: 1964-1967 doesn't allow for the inclusion of such material.

Still, at least for most Byrdmaniacs and music lovers of a similar demographic, poring over the wealth of material that is present here should elicit much the same glow as that which emanates from the sound of this iconic band at its best