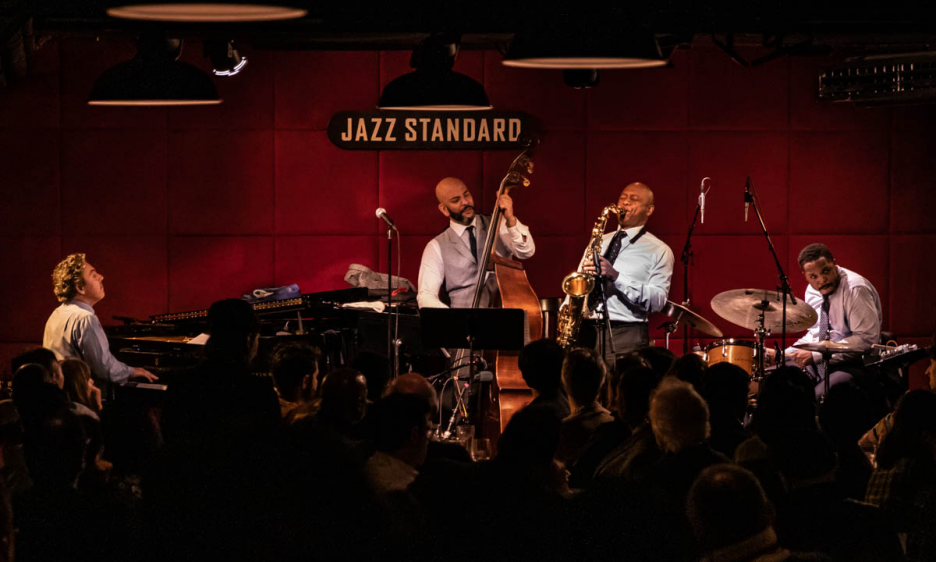 The Branford Marsalis Quartet came into New York's Jazz Standard in late February to showcase The Secret Between The Shadow And The Soul, their first new album release in seven years and, in marking the special occasion, to blow the roof off that primetime jazz basement. That it has been seven years since the band's last new release does not mean they have been sitting around getting rusty—far, far from it. The four-headed musical monster has been touring the world almost continuously in that time, whether on their own or in support of Kurt Elling. As Marsalis tells the story of how the album got made, one May day down under in Australia, the foursome were looking at a few days of downtime and the leader asked his mates whether they'd rather go to the beach or to a recording studio and cut some new tracks. The Secret is the compelling result of their wise choice.

The late show at Jazz Standard was packed with new and long-time BMQ fans as well as friends of the band—the pre-show bar scene saw Branford chatting with saxophonist Tim Berne and bassist Phil Lesh of the Grateful Dead, with whom Marsalis shared some momentous jams over the years. But the audience had come to see the guys on stage. Marsalis has been leading a working quartet since the mid-1980's and has always been deft in selecting his players— memorable early editions featured, among others, the stellar drummer Jeff "Tain" Watts and the late great pianist Kenny Kirkland. The current ensemble continues the tradition of virtuoso players who may be even more remarkable for their longevity with the leader: pianist Joey Calderazzo and bassist Eric Revis have each been with Branford for two decades; drummer Justin Faulkner, who joined the BMQ when he was in high school, is the new guy after "only" a decade in the band.

The set featured, no surprise, the tunes on the new album. The band kicked off with a rousing rendition of Eric Revis's composition, "Dance Of The Evil Toys," that had every member of the band at full throttle right out of the gate—Faulkner spanking the kit with martial control, Revis locking down the bottom end for Calderazzo's shimmering piano and Marsalis's sheets of tenor saxophone sound. They followed with the peaceful "Conversation Among The Ruins," a delicate meditation written by Joey Calderazzo that featured mind-melded interplay between the pianist and Marsalis on soprano sax.

Andrew Hill's "Snake Hip Waltz" is a tune that has been called a puzzle because of its tricky time signature and unusual melodic composition. On this night it was given a swinging treatment, Marsalis leading the way with tight, confident statements on soprano sax. The elegant "Cianna," another contemplative Joey Calderazzo composition, came next, the pianist's probing, moody chords anchored by the formidable bass of Revis.

In a set full of bravura performances, "Life Filtering Among The Flowers" was one of the standouts. The sole Branford Marsalis composition on the new album, and the only one played on this night, the tune combined the sonic pleasures of, say, a great Blue Note session, circa 1963, with a spacious, modern dynamic that felt at times as if it might veer into the realm of acid jazz. Faulkner and Revis gave Calderazzo a reinforced foundation to chord over and around while Marsalis explored all sides of the questions he raised on his tenor sax with highly evolved authority.

The set wound up, appropriately, with Keith Jarrett's spunky "The Wind Up," a fun romp that had every member of the band rocking out from Calderazzo ripping it up on piano to Faulkner killing it on the drums and the leader holding it together with tight sax runs. The audience ate it up.

The Branford Marsalis Quartet is made up of four off-the-charts virtuoso players but first and foremost it is a band—strong, sophisticated, creative talents meshing ideas into a single result. In person and recorded, their music is the product of collective effort where the whole is greater than the sum of the jam. While the Marsalis "brand" may always be the band's marquee attraction, the unit's leader appears to prefer to play in the company of musical equals who can challenge him, pique his imagination and, at times, outshine him. Surrounded by such gifted colleagues as Eric Revis on bass, Justin Faulkner on drums and Joey Calderazzo on piano, Branford Marsalis, as superb as he is on tenor and soprano saxophones, may not even be the most technically proficient musician in the band on his respective instrument. That he seems to like it that way is a credit to him—and a brilliant gift to jazz lovers.