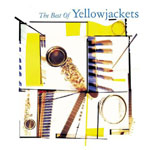 From this greatest hits collection one learns that the album to get is 1981's Yellowjackets, the one with the honeycomb cover. The album to avoid, on the other hand, is 1985's Samurai Samba. Mirage a Trois, released in 1983, falls somewhere in between. Sweepingly general overview: The group started out great with fire-breathing guitarist Robben Ford, went through a cheesy middle period with altoist Marc Russo, and bounced back in the 90s with the advent of tenor-meister Bob Mintzer, who plays on Dreamland (1995), Blue Hats (1997) and Club Nocturne (1998). (This Warner Bros. compilation features only the group's Warner Bros. releases. They recorded with MCA from 1986-1989 and GRP from 1990-1993.)

You'll immediately want to program out weak tracks like "Daddy's Gonna Miss You" and "Homecoming." On the other hand, "Imperial Strut" flat out rocks. Unfortunately, however, this is the disc's only satisfying taste of Robben Ford. The other top two cuts are Mintzer's "Up From New Orleans," featuring hip vocals and scatting by Kurt Elling, and "Summer Song," a seductive bossa nova by keyboardist Russell Ferrante and bassist Jimmy Haslip with truly incredible vocalizing by Bobby McFerrin. Also worth repeated listens are Mintzer's "New Rochelle" (named for this writer's hometown) and the theme from the film Il Postino, previously unreleased, which starts out sounding like typical movie music but ultimately showcases Ferrante's jazz cred on acoustic piano. Haslip's bass playing is powerful throughout, especially on "Spirit of the West." And drummers Ricky Lawson and William Kennedy are pretty much flawless.

Of all the fusion-veering-toward-pop bands, the Yellowjackets have the most going for them. A recent Downbeat story on the politics of jazz radio mentioned that they've been systematically shut out of all mass-market programming. The guys in the band aren't happy, for obvious financial reasons. But artistically, it's probably a very good sign.