By DOUG COLLETTE
February 7, 2015
Sign in to view read count 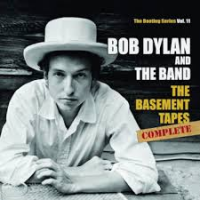 Shorn of the overdubs and remixes that adorned the selected collection of tracks released in 1975 under the supervision of Robbie Robertson, the quick succession of thirty-eight cuts comprising The Basement Tapes Raw: The Bootleg Series Vol. 11 juxtaposes traditional songs, contemporary roots material and originals of greater or less significance to achieve a masterful recreation of the ambiance that must've arisen from those hallowed sessions Bob Dylan and the band conducted in Woodstock, NY in the summer of 1967.

As the musicians follow the muse in the moment, the alternately relaxed and inspired atmosphere they conjure is equally palpable as the wondrous process of rediscovering songs such as "Minstrel Boy" gives birth to their own compositions along the lines of "Tears of Rage." And Dylan's own laughter at a couple junctures here is reflective of the good-natures sense of humor in tunes like "Quinn the Eskimo (The Mighty Quinn)." Yet, it's not as if Johnny Cash's "Folsom Prison blues" proceeds directly from "Don't Ya Tell Henry" and "Yea Heavy and a Bottle of Bread"(or vice versa), but more likely those numbers spark ideas that lead to "This Wheel's On Fire" and "Nothing Was Delivered."

During this time spent with the Band, Bob Dylan was making a somewhat concerted effort to produce some demos of new material for song publishing purposes, but he was also aiming to reconnect with his roots in American folk, country and blues at a time such fundamentals were out of fashion during the Summer of Love. While The Basement Tapes Raw contains most of the best-known tunes from the often bootlegged recordings, i.e. "Crash on the Levee" and and "This Wheel's On Fire," it also spotlights lesser-know compositions such as the haunting "I'm Not There," a Dylan composition as worthy of dissection and interpretation as any of the songs from Bringing It All Back Home (Columbia, 1965), Highway 61 Revisited(Columbia, 1965) and Blonde on Blonde (Columbia, 1966) that elevated him to the stature as a prophet of his times.

Similarly, the highly emotive performance of "Sign on the Cross," is one of the Bard's most passionate turns at singing on The Basement Tapes (or elsewhere in his discography for that matter), reaffirmation, if it was needed, of an engagement in this music and these songs often uncommon in more formal recording sessions. Certainly with the complete(sic) recordings now also available, it's possible to experience the fits and starts of these informal get-togethers, but it's arguable the most vivid memories on the part of all involved here, including multi-instrumentalist, tape operator and archivist Garth Hudson from the Band, take the form of a similar sequence of tracks as here, including the two versions of "You Ain't Goin' Nowhere" that bookend the second disc.

The air of mystery that's surrounded these nearly forty-year old recordings may never be wholly dispelled, but the essays in the booklet within this package go a long way in clarify the time-line of events. Given his authorship of Million Dollar Bash (Jawbone Press, 2014), an entire book devoted to the minutiae within which all this music was created, Sid Griffin becomes oddly over-effusive. Yet his emotional approach serves its purpose as it represents the fan's perspective even as it balances the more pragmatic depiction of the events leading to the content itself (and its analysis) from Ben Rollins and archivist Jan Haust.

The Basement Tapes Raw ends up as discerning as it is comprehensive and, proceeding directly as it does from its predecessor in The Bootleg Series, Another Self-Portrait (Legacy Recordings, 2013), the title effectively sets the stage to reaffirm the continuity of this archival project if rumors come to fruition about the next edition devoted to Blood on the Tracks, (Columbia, 1974); the comeback of Dylan's deriving from multiple recording sessions hasn't exactly been subject to quite so much controversy as The Basement Tapes, but given the significance of that title in the context of his career, it is nevertheless deserving of a comparable level of scrutiny.

Whether or not that happens though, the great,joyous irony remains how an artist so inscrutable as Bob Dylan would become the subject of an exhaustive project, so consistently and gratifyingly illuminating of his work by dint of loving detail applied the way from the cover art and its images of memorabilia to the level of expertise devoted to the recordings.