Pray For Brain: None Of The Above 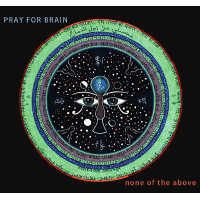 "Circus" is a piece that communicates yet another side of this enterprising unit's makeup. They inaugurate the proceedings with a splintered drums and guitar call / response motif. But matters swiftly transform into a C&W like two-step breakout, coupled with the sounds of Morocco via Dill's clever phraseology and shrewd improvisational faculties along with an affable melodic hook. The guitarist's slick-picking lines come to a halt as they migrate into a 2/4 rock pulse and moderate the main theme. Consequently, the group's divergent processes don't end there, as Dill incorporates jazzy Wes Montgomery-like chord patterns into the schematic along with a touch of pandemonium towards the closing moments. In sum, if you're looking for a solidly produced jazz rock or progressive rock outing that deviates from the tried and true, then Pray For Brain fits the bill in a rather huge way.

About Pray For Brain