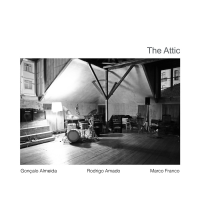 The Attic unites three Portuguese musicians who are making a name for themselves beyond their native land. Now based in Rotterdam, bassist Gonçalo Almeida works with a range of European artists, but may be best known as leader of the Lama Trio, with trumpeter Susana Santos Silva. Saxophonist Rodrigo Amado probably enjoys the highest profile, befitting his activity with his own Motion Trio, which has featured as guests trumpeter Peter Evans and trombonist Jeb Bishop, as well as with his cooperative quartet with Joe McPhee, Chris Corsano and Kent Kessler. Completing the threesome is drummer Marco Franco, heard with Clocks And Clouds and improvising foursome Deux Maisons.

Although Almeida contributes charts to many of his bands, this outfit operates firmly in the free jazz/improvised music continuum favored by Amado. Across five selections recorded live, the trio demonstrates a determinedly democratic ethos in which each of the members benefits from lots of legroom, as well as equal billing in the unfettered exchanges. Almeida often reveals a melodic core to his playing even in the outside situations, shown nowhere better than in his marvelously engaging unaccompanied introduction to "Shadow," where he delves into cello register sonorities and exquisite harmonics, tempered by wavering abrasion. That track continues with Amado's dissonant pinched tenor saxophone cry, before opening into brooding tenor incantations paced by harmonious bass counterpoint.

Each of the first three cuts builds from one or two instruments in spacious dialogue, until reaching foot to the floor intensity. "Spring" starts with Almeida's slurred pizzicato and Franco's tappy timbral spurts, then bass overtones picked like chimes, before Amado sets down a folk-inflected line which he repeats to hypnotic effect.

The longer "Board" takes a more rollercoaster trajectory but arrives in the same promised land giving a pulpit to Amado's sermonizing tenor, speaking in tongues, and clattering drums. "Nail" leaps in at the level where most pieces end, as Amado seesaws between gruff flexing and altissimo cries over roiling undercurrents. It's exciting, passionate, and energetic, suggesting a fertile future waits for this particular aggregation.