Ivo Perelman: The Art of the Improv Trio Volume 1

BY GLENN ASTARITA
November 30, 2016
Sign in to view read count 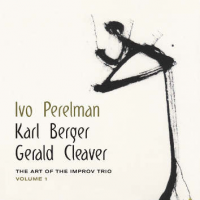 Tenor saxophonist Ivo Perelman's voluminous discography gets another boost with six concurrent trio releases, titled The Art of the Improv Trio Volumes 1 through 6. It's not surprising since the artist has become one of the more prolific jazz improvisers spanning the past several decades. Thus, Volume 1 launches the festivities with Karl Berger laying down his vibes mallets and performing solely on piano, along with Perelman mainstay, drummer Gerald Cleaver who is a contributor on five of the six volumes.

There are quite a few quiet and introspective moments dispersed throughout the program, yet the trio's anticipated, highly energized mode of execution is still intact. They open with the softly searching, up-tempo ballad. "Part 1." But Cleaver peppers his associates and gels to a Perelman's weeping, twirling and zinging vibrato lines on "Part 2," also featuring changeable modalities. Nonetheless, the artists' unhurried creative output is purposeful and not about navigating through pathways without a destination in mind.

" Part 5" is constructed with Berger's cascading chord clusters and Cleaver's rumbling undercurrents. Here, the soloists' mimic each other's spur of the moment ideas amid hefty doses of contrapuntal maneuvers and alternating streams of consciousness. They cover a lot of fertile musical terrain without becoming too boisterous or flamboyant. It's a freely organized aural feast that is framed on the trio's focused line of attack. They intermittently notch it up into the upper-registers via oscillating improv segments but wind matters back down throughout.

As of this writing I've not previewed all the remaining volumes, but given Perelman's track record as a master improviser, there ought to be plenty of musical surprises and persuasive dialogues throughout the lion's share of these 6 volumes.