By Karl Ackermann
November 30, 2016
Sign in to view read count 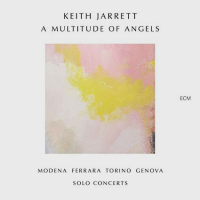 In the last solo concert tour of the first half of Keith Jarrett's career, the preeminent pianist of our time had, himself, recorded the performances across four Italian locations, on his digital audio tape machine. These would be the final public performances Jarrett would give for a number of years as he worked through chronic fatigue syndrome. On a concert timeline, A Multitude of Angels follows the 1995 performances captured on La Scala (ECM, 1997) but with an unexplained twenty-year delay in release.

Undiagnosed at the time, but clearly suffering, Jarrett believed this may have been not just the end of his career as a performer but of his ability to play at all. Ironically, it was also the period where he felt at the height of his artistic and creative powers. The liner notes for this four-CD box set—written by Jarrett—are unusually personal in that they reflect both his anxiety and determination to remain present in the music.

Describing Jarrett's long-form improvisations, other than in broad terms, is an impractical undertaking. There are the familiar elements of his repertoire—the rollicking, gospel feel of "Modena, Part I" that opens Disc 1 and takes on an elegiac quality near its half-hour mark. It is classic Jarrett. In contrast, there is "Genova, Part I." Abstract and angular, Jarrett abandons a melody for thirty-one minutes of technique, something few musicians could make this compelling.

Jarrett has organized the tracks in a logical and attention-holding manner. "Ferrara, Part I" is introspective to the point that one can almost hear Jarrett's trepidation entangling with his determination; the latter winning out in the end as he exuberantly frees himself. There are also the two closing staples of Jarrett's early solo concerts, "Danny Boy" and "Over The Rainbow" both treated in a more unequivocal manner in comparison to the otherwise improvisational arc of the collection.

Though Jarrett acknowledges the physical challenges he faced in these performances, there is no evidence of any such limitations in listening to A Multitude of Angels. Jarrett speaks of an unspecific kind of spirituality that permeates the music in these concerts; ambiguous in terms of root influences but fueled by an intangible energy, and of that quality, the evidence is abundant. This collection would be a necessity if only because it will be the last of its kind from that era but moreover, it is as cathartic a collection for listeners as it apparently has been for Jarrett.