By JOHN EYLES
September 10, 2020
Sign in to view read count
As an album title, The Art of the Duo has been used at least three times: a 1983 studio recording by US saxophonist Lee Konitz and German trombonist Albert Mangelsdorff, released in 1988 on Enja; a 1988 studio recording by pianist Mal Waldron and saxophonist Jim Pepper, released in 1989 on Tutu; a 1991 live recording by Danish bassist Niels-Henning Orsted Pedersen and Belgian guitarist Philip Catherine, released in 1993 on Enja. (The appearance of two Enja albums is significant as that label once had a sub-label called Art of the Duo.) As a phrase, "the art of the duo" is frequently bandied about without being explained or defined. Anyone brave—or foolhardy—enough to Google the phrase will find no shortage of reading matter but nothing definitive. Maybe there are as many opinions as there are listeners? The two duo albums below, both recorded in concert, will certainly add fuel to any controversy...

Exquisitely recorded in concert at the Kevin Barry Room, National Concert Hall, Dublin, in January 2015, Tongue in a Bell comprises three tracks running for a total of just under forty-one minutes. At twenty-five minutes, the title track accounts for most of the album, with the two shorter tracks adding variety, being far more than makeweights or filler. Right from the start, both players are full-on, fluently playing flat out, each in their own instantly recognisable, distinctive style. Of course, Brötzmann's energy and force are renowned, but Smyth impressively matches him every step of the way.

In their hands, the art of the duo means each player should be true to their own way of playing whilst remaining attentive to and mindful of what the other is playing; in other words, it is based on co-operation between equals rather than competition. In practice, each of them occasionally plays a solo while the other shifts down a gear, remaining identifiable. These solo spots often provide opportunities to hear and appreciate the players' more intimate and reflective sides—less energized but just as impressive. However, in a blindfold listening, anyone familiar with Brötzmann and Smyth would have no problem identifying either of them from this excellent recording. As a duo, this works well. 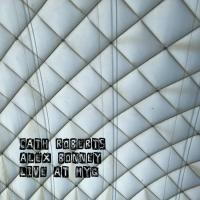 Recorded live at London's intimate Hundred Years Gallery (the HYG of the title) on Valentine's Day 2020, this album consists of one thirty-minute track, presumably the entire set. In a duo of Cath Roberts' baritone saxophone and Alex Bonney's pocket trumpet, Bonney also plays electronics, which explains the distorted sounds which open the album and recur at intervals throughout it. These sounds may have worked well in the live setting, where audience members could see how Bonney was producing them, but on a duo recording they can make it sound as if a third party is contributing or there are technical issues. This is unfortunate as the combination of sounds from sax and trumpet is a success, the two having mastered the art of the duo.

Their tonal and pitch differences mean that both can be clearly heard throughout, important as they weave around each other for much of the time, becoming entwined. Roberts and Bonney sound familiar with one another's playing and comfortable together, giving each other plenty of space. The music here is improvised, with the two reacting to one another to produce a pleasingly coherent whole. The electronics never feel like an integral part of that whole, more like a bolted-on extra, particularly as they are not used to process the sounds of the horns. Roberts and Bonney have the potential to be a first-rate improvising duo if they can sort out what to do about those pesky electronics...

Tongue in a Bell

Tracks: Tongue in a Bell; Falling Out of All the Towers of Space; Eyes Wide.