By FLORENCE WETZEL
February 17, 2009
Sign in to view read count 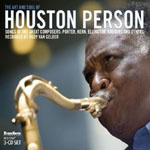 The Art and Soul of Houston Person is an irresistible combination of the celebrated tenor saxophonist and the Great American Songbook. The 30 songs on this generous three-CD set were culled by Person from ten of his HighNote CDs, with the addition of four new songs recorded in spring, 2008. The songs feature an array of talented sidemen, including pianist Bill Charlap, bassists Ron Carter and Ray Drummond and drummer Grady Tate. If that isn't compelling enough, all the tracks were mixed, edited and mastered by the eminent Rudy Van Gelder in his legendary Englewood Cliffs studio.

The collection is full of high points, with several songs particularly worth noting. The upbeat opener, "You Do Something to Me," showcases Person's golden warmth and impeccable swing. The song also features John di Martino's exquisite touch on piano and John Burr's fluid bass. The same group shines on "I Don't Stand a Ghost of a Chance," elegantly capturing the song's quiet longing. Person exhibits a poignant tenderness and drummer Jerome Jennings adds just the right backup with incredibly spacious brushwork. "Sentimental Journey" is a joyful toe-tapper; "Here's That Rainy Day" explores the rich undertones of melancholy and "Blue Moon" is surprisingly upbeat, with Person's tenor fat and happy. And don't miss "Mack the Knife," a duet with Ron Carter where the two musicians turn the song inside out and trade lines with fluent ease.

In a 2004 interview, Person defined jazz as, "something that, when the end of the day comes, after a hard and frustrating day out in the world, relieves you. Relaxes you and makes you feel good." The Art and Soul of Houston Person is exactly that kind of music, a treasure chest of luscious, soothing sound.

CD1: You Do Something to Me; I Don't Stand a Ghost of a Chance; You're a Sweetheart; Maybe You'll Be There; All the Things You Are; You're My Everything; Skylark; I Only Have Eyes for You; Everything I Have Is Yours; Wonder Why. CD2: Do Nothing Till You Hear from Me; Here's That Rainy Day; Isn't It Romantic?; Fools Rush In; It Had to Be You; But Beautiful; For All We Know; Blue Moon; Bewitched; Don't Get Around Much Anymore. CD3: Sentimental Journey; Where Are You?; There's a Small Hotel; Tenderly; Be My Love; It Might as Well Be Spring; My Funny Valentine; Gentle Rain; Mack the Knife; The Very Thought of You.