BY GLENN ASTARITA
February 17, 2009
Sign in to view read count 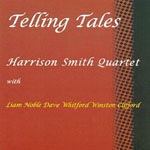 British reed man Harrison Smith is known as both an inside and outside player, but his playing is rooted within traditional jazz attributes that interweave among the more progressive slants. With this quartet release, the artist injects a series of wide-ranging propositions into a crop of largely, memorable compositions marked by great depth and capacious musical environs. In effect, it's a nicely-structured yet democratic engagement as the respective musicians serve as key cogs in the overall jazz machine.

Compositional excellence and superb improvising yield the winning edge here. The band launches the gala with "Tea with T," where bassist Dave Whitford sets matters in motion with a booming ostinato, followed by en endearing melody and Smith's mood-evoking bass clarinet lines. Otherwise, Smith and pianist Liam Noble weave in and out of the multifarious swing and bop pulses, amid a few tender moments interspersed throughout.

On "Upon Reflection," Smith conjures up lucid imagery of a late night jazz joint performance via his bluesy tenor sax phrasings dappled with subtle nuances. Within many passages, the band professes asymmetrical doses of grace and power, which is a notion transmitted by Smith's blithe soprano sax lines atop a buoyant mid-tempo swing during "Around We Go. The quartet generates the big knockout punch in spots and tempers the pitch when it makes sense. Hence, the ensemble spawns a tight-knit panorama, featuring perky bop grooves and torrid crescendos.

Smith skirts the free zone and seemingly battles drummer Winston Clifford for a rite of passage with the up-tempo, "On The Edge." To that end, the leader of this date presents a divergent track mix that alludes to a comprehensive program, sans any frills or gimmicks. Smith's qualitative music-making looms rather large among the hordes of jazz ensemble offerings that hit the streets on a regular basis.

Tea with T; Questions, questions; Upon Reflection; A Bird in the Hand (for Alex Hand); Around we go; Changes in Motion; On the edge; In shadow; Hybrid.