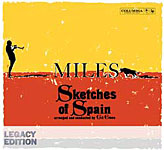 His biographer Ian Carr called trumpeter Miles Davis' Kind Of Blue (Columbia, 1959) "one of the seminal albums, and one of the most enduring classics, of jazz." It was, indeed, a pioneering leap into modal jazz, and most Davis fans would agree with Carr's assessment. The trumpeter was accompanied by an outstanding band comprising tenor saxophonist John Coltrane, alto saxophonist Julian Cannonball Adderley, pianist Bill Evans (replaced by Wynton Kelly on one track), bassist Paul Chambers and drummer Jimmy Cobb. The album's opening track, "So What," in particular, has become a jazz classic. The closing track, "Flamenco Sketches," gets less attention—but it's where this review starts.

When seen in the context of Davis' next project, the concept album Sketches Of Spain, "Flamenco Sketches" takes on more meaning, serving as a bridge from the straight-ahead cool jazz of Kind Of Blue to the adventurous reworking of traditional Spanish music chords, melodic structures and tempos found on Sketches Of Spain. Davis' foray into traditional Spanish music was inspired by Joaquin Rodrigo's "Concierto de Aranjuez," a work written in 1939 that borrows heavily from a deeper musical past, drawing upon a long tradition of flamenco guitar and Arab musical ideas as well.

Many traditional Spanish classics pay homage to the country's Arab past. The composer of "Lamento Andaluz" is unknown, the song, nevertheless, is a lament, longing for the glory days of Andalusia. Francisco Tarrega composed "Capricho Arabe" in 1880 as an acknowledgment of the Moorish influence on Spanish music. The music is rich with the syncopated rhythms and melodic ideas of traditional Spanish music from the south of Spain—areas under Muslim control for nearly 700 years (755-1492).

This connection with the past is embodied in Rodrigo's "Concierto de Aranjuez." The composer's best-known work, it was inspired by the gardens at Palacio Real de Aranjuez, the spring resort (or palace) and gardens originally built by Philip II of Spain in the 16th century. Rodrigo hoped to capture "the fragrance of magnolias, the singing of birds and the gushing of fountains" in the gardens of Aranjuez. The musical ideas in both Rodrigo's and Tarrega's work can be traced back even further, however—to a time when Cordoba was at its height, when Spain was a conduit between Europe and the vast learning and cultural sophistication of the Islamic world. The similarities in traditional Andalusian Spanish music and traditional Arab music are reminders of this historic process and the tremendous value of cultural exchange.

Arab music makes extensive use of maqams—the long pauses that split up melodic lines into several melodic passages. The maqam technique certainly sounds like Davis' approach to improvisation—the long pauses that helped to make him so famous. But that's getting ahead of the story.

Many of the ideas of Arab music (the patterns of notes, the syncopated rhythms) predate Islam. This earlier music focused on vocals by singer-servant women called qaynah. These women put traditional Arab poetry to music. But although Arab musical ideas were probably influenced by contact with countries like Persia, Egypt and Ethiopia, few records remain. The pre-Islamic tradition featured haunting melodic lines and sense of time. In the Hijaz style, also known as the early Arabian classical school (it was developed during the Abbasid Era, 750-1258), the musicians added more instruments during performances. The Hijaz school was followed by the Andalusian style of Arab music, which began in the early 800s and spread to Cordoba, Seville, Toledo, Valencia and Granada, where it clearly influenced flamenco and southern Spanish traditional music. The similarities in melodic patterns, rhythm and chords are unmistakable.

The wistful, melancholy ambiance in both Arab and traditional Andalusian music clearly lends itself to the kind of cool jazz of Miles Davis. In each case, be it Arab, Spanish or jazz music, borrowing across cultural lines has had rich results. Such borrowing serves as a reminder of our common connections, of our common humanity. It can be clearly seen in a journey from Miles Davis to Mecca and the various stages and destinations in between.

Reading about these cultural connections is one thing. When it comes to music, there is no substitute for listening. Along with Sketches Of Spain, the following are well worth listening to: Pepe Romero's album Tarrega: Recuerdos De La Alhambra And Albeniz (Philips, 1990), and the companion CD to Habib Hassan Touma's book, The Music Of The Arabs (Amadeus Press, 2003).