BY MARK CORROTO
August 9, 2012
Sign in to view read count 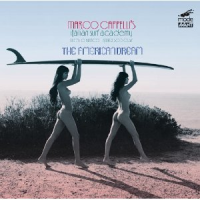 Things get lost in translation. It's inevitable, and it's not just words and meaning. Cultural things morph. Take a Venetian or Roman to an Olive Garden restaurant in America and she won't recognize much on the menu, or send an American to Puglia with the task of finding a pizza pocket. Some things just don't translate.

Such is not the case with hipness. What is cool in Milano is happening in Brooklyn. When Italian guitarist Marco Cappelli, the Italian Marc Ribot, explores American surf culture and its roots in early rock-and-roll, the music rebounds to the stella azzurra of Italy.

His Italian Surf Academy is a trio, with two artists from the big band Naked Musicians—bassist Luca Lo Bianco and superstar drummer Francesco Cusa. While the emphasis here is on an American sound, only one track was penned by an American. "Secret Agent Man," made famous by Johnny Rivers but covered by everyone from Mel Torme to Devo, is played nearly straight, sourcing the 1950s and '60s sound of Link Wray.

Things get interesting with the cross-pollination of music, such as Ennio Morricone's soundtrack for the 1966 Sergio Leone film The Good, the Bad and the Ugly. Cappelli, like John Zorn before him, deconstructs Morricone on "The Sundown / San Antonio Mission," an American Western sound with an accent. With "Cinque Bambole," he inserts traditional Italian melodies over the pop-ish score, while "Sesso Matto" (or Sex Mad) ups the intensity, shredding bits behind Gaia Matteuzzi's orgasmic vocals. He plies his best Dick Dale guitar sound on "Django" and the eeriest groove on "Blood And Black Lace," from the 1964 horror film Six Women for the Murderer. Back to Morricone for "Driving Decoy" and a speeding pulse complete with overdubbed English dialogue from the 1968 movie Danger: Diabolik, that was also parodied by the Beastie Boys.

Cappelli's mashup of all things surf and Western, are not so much American as they are the Italian influence on American Culture. Now if someone could just teach my local bartender how to make a proper Bellini.