Home » Jazz Articles » Tomas Fujiwara & The Hook Up: The Air is Different 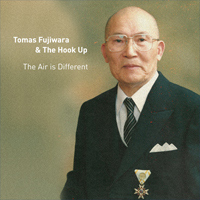 Drummer Tomas Fujiwara inhabits the fertile Brooklyn scene alongside guitarist Mary Halvorson, a frequent collaborator who is part of his band, The Hook Up; alongside cornetist Taylor Ho Bynum, both are also featured on collective The Thirteenth Assembly's outstanding Station Direct (Important, 2011). So it's not surprising that similarly smart multifaceted compositions, delivered through tight but sufficiently loose arrangements that allow space for left field solos, are high on the agenda on the band's sophomore effort. With only the bass chair changing since Actionspeak (482 Music, 2010), there is a facility that comes from familiarity with materials and methods.

Even though not peppered with drum solos, it is perhaps possible to discern that The Air Is Different is a drummer-led date. Evidence for the prosecution comes with the helpful explication in the liners that some of the most driving passages were in fact composed from the drum kit. But don't worry, there are more than flash grooves on hand here, across six originals spanning some 45 minutes. Even with inspiration as varied as the sound of prayer bowls, hip hop and Fujiwara's mother's singing rounds, the pieces hang together well, often going through multiple non-repeating sections.

It helps that he has assembled such an accomplished crew, with Halvorson and tenor saxophonist Brian Settles among the most distinctive voices. As it happens, the guitarist would be quickly identified even in a blindfold test by her blend of melodic finger-picking, bending pitches, and leaping distortion. Settles breaks his lines into stuttering clipped phrases reminiscent of the late Frank Lowe but tempers them with an ambiguous tonality that eschews pure intervals. That's a contrast to his frontline partner, trumpeter Jonathan Finlayson, whose clean exposition is also more likely to turn the honeyed phrase. On bass Trevor Dunn works in solid tandem with the leader to ease through even the trickiest switchbacks.

Fujiwara often works in layers to arrive at complex but satisfying ends. On "Lineage," a fiercely propulsive start breaks down into first a knotty trumpet pitched against wild guitar firestorms, then a section for jostling tenor atop pulsing drums. Likewise on "Cosmopolitan (Rediscovery)," a bedrock of skronk guitar and choppy rhythm contrasts with a series of languid horn unisons before transforming into a poised pastoral, with Settles at his most playful and Ben Websterish. It's only on the closing "Postcards" that the leader takes the spotlight, embellishing the piece with polyrhythmic verve. It concludes another strong album that confirms Fujiwara's union of the cerebral and the emotive as one to keep tabs on for the future.