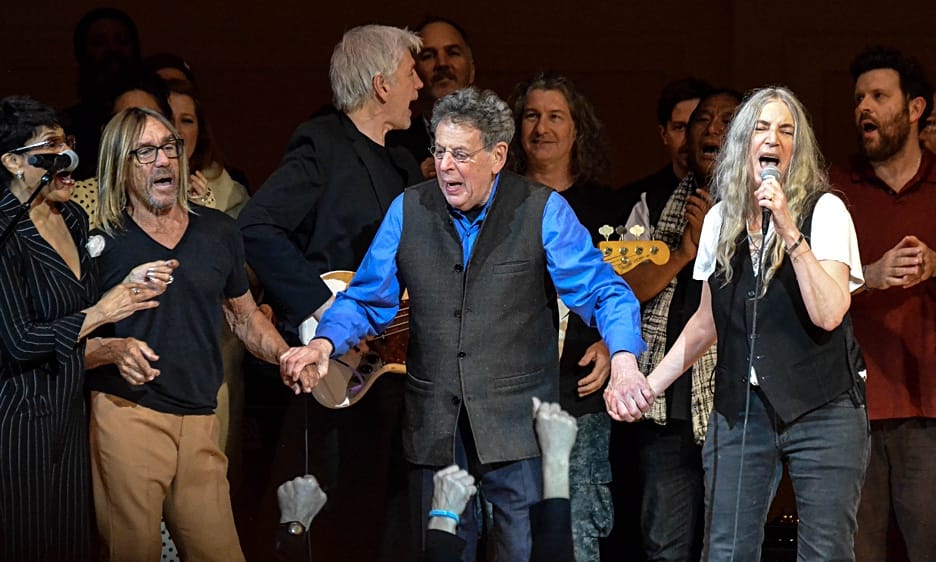 This eclectic mix of performers represented an array of musical and spoken word genres from around the world. Hand-picked by Glass, the world-renowned composer who is also the Vice President of Tibet House, the venue was energized by the musical celebration that was definitely a performance for the ages.

The Tibet House U.S. was founded in 1987 by the Dali Lama, himself, the living symbol of the unification of the state of Tibet. Its mission was and is to preserve, protect and empower the rich and unique culture of Tibet in the United States. Each year at Carnegie Hall, a diverse and fantastic benefit concert is held. A Who's Who of musical and artistic royalty: David Bowie; Lou Reed; Debbie Harry; the Roots; Sharon Jones & the Dap Kings; the Flaming Lips; R.E.M.; Angelique Kidjo; Stephen Colbert; Jason Isbell, the Chris Robinson Brotherhood; Paul Simon; New Order; Ben Harper; Jon Batiste; Trey Anastasio; Gogol Bordello; Nathaniel Rateliff and Shawn Colvin have all performed in past years.

As has become the custom, the evening began with a performance by the Tibetan Monks and opening remarks by Tibet House U.S. President Robert Thurman. Glass then appeared and introduced Laurie Anderson. Anderson (along with Rubin Kodheli, Jesse Paris Smith and Tenzin Choegyal) energized the audience by leading the sold-out crowd through a surprise singalong. Stewart Hurwood took the stage and delivered an interesting musical landscape called "Drones" that was made possible by channeling the feedback of a number of his guitars and amps.

Other highlights, and there were many, included: Sandra Oh's take on Allen Ginsberg's poem "When the Light Appears" (which was delivered with Glass' accompaniment on piano); Bridgers and Berninger's duet on "Walking On A String;" Berninger's perfect cover of Mercury Rev's "Holes;" Choegyal's version of "Snow Lion;" the Resistance Revival Chorus (dressed, as is their custom, in white) performing an acapella song about female empowerment and Margo Price's fantastic three-song performance which was highlighted by the world premiere of her new tune "Better Than Nothin.'"

Certain performances and performers stood out more than others. Bettye LaVette belted out an amazing version of Bob Dylan's "The Times They Are A Changin,'" a heartfelt, powerful and poignant version of George Harrison's "Isn't It A Pity" and finally her own tune, "They Call It Love."

Iggy Pop brought the audience to its feet just by setting foot on the stage. He brought the house down with a ballsy and attitudinal rendering of the Stooges' punk rock classic "I Wanna Be Your Dog." During the amazing performance, Pop tore off his jacket, threw down his mic, tossed aside the microphone stand, performed on his back and crawled across the stage. The usually staid Carnegie Hall audience gave him a standing ovation.

The night came to a close with Patti Smith and her band. Smith delivered a spot-on version of "About A Boy" and then performed "Don't Say Nothin.'" The concert ended with Smith and each of the performers along with virtually every audience member singing "People Have the Power" at the top of their collective lungs.

After the crowd fanned out of the legendary venue, the evening's festivities continued with an elegant and star-studded post-concert gala held at another famed New York City institution, the Ziegfeld Ballroom.