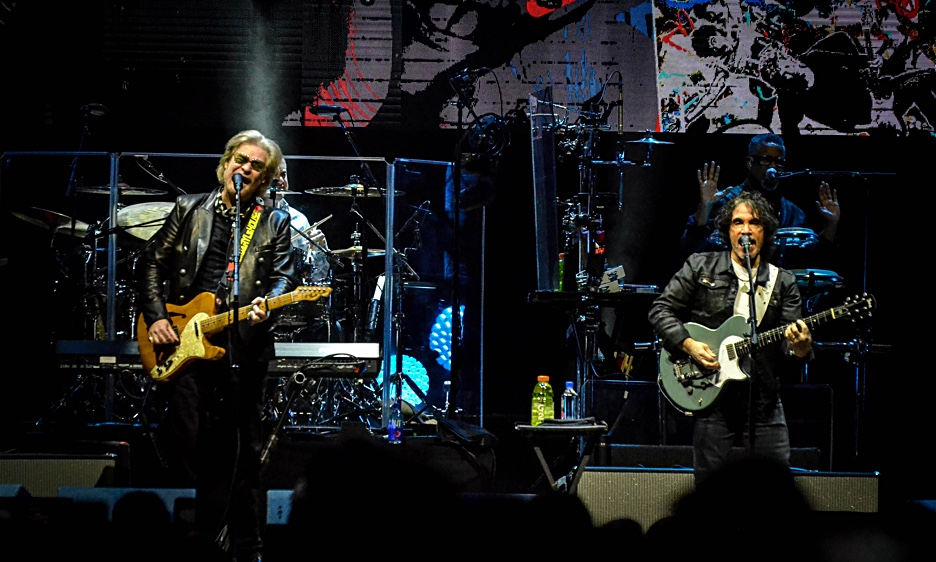 Daryl Hall & John Oates have been making music together for over 50 years. Their friendship was forged in 1967 and their collaboration dates back to 1969. The duo released their debut album, Whole Oates, (Atlantic Records) in 1972. By the 1980s, Hall & Oates, as many call them, had become veritable hit-making machine, delivering platinum albums and hit singles at a fantastic and furious rate. Their songs were everywhere (and many still are)---on the radio, in jukeboxes and in the collections of many music fans. They released an enviable and seemingly endless string "classic" tunes that include six number 1 Billboard hits: "I Can't Go For That (No Can Do)," "Kiss On My List," "Maneater," "Out of Touch," "Private Eyes" and "Rich Girl." In addition, Hall & Oates have also charted many other songs in the Top 40 (including "Sara Smile" and "She's Gone").

Squeeze was formed in March of 1974 by Chris Difford and Glenn Tilbrook. Guitarists Difford and Tilbrook soon added Jools Holland (keyboards), Gilson Lavis (drums) and Harry Kakoulli (bass). According to the band's official biography, the group performed under several names, most frequently Captain Trundlow's Sky Company or Skyco, before finally settling on the name Squeeze. Over the years Squeeze has had numerous lineup changes featuring over 20 members with only Difford and Tilbrook remaining constant. Squeeze bridged the gap and provided the link between the pop-sensibilities of the classic British bands of the '60s and the modern rock/new wave/punk of the late '70s/early '80s. Squeeze's songs featured smart pop—edgy yet mainstream, literate and erudite lyrics with a decidedly British sense of self and humor, layered over well-crafted, catchy, hook-filled melodies. Hard though it may be to believe, Squeeze didn't have a U.S. Top 40 (Billboard Hot 100) hit until 1987, with "Hourglass" (the group's best-known song, "Tempted" stalled at #49 in 1981).

KT Tunstall, is a Scottish singer-songwriter. She first broke into the public eye in 2004 when she performed on the BBC show, Later... with Jools Holland. Her debut album, Eye to the Telescope (Relentless, 2004) was critically lauded and Tunstall received a number of prestigious accolades including multiple Brit Award nominations (1 win), a Grammy Award nomination and has won a Q Award, a UK Music Video Award, an Ivor Novello Award, a Scottish Style Award, a European Border Breakers Award, a Music Week Award and two BMI London Awards. During her career, Tunstall has released six albums.

Tunstall began the evening with a performance that was beset by technical difficulties. The sound went out during her first song and later in the performance her guitar seemed to voice its displeasure. Tunstall, however, handled these issues with aplomb. She jokingly stated that "adversity came to visit me at the most important gig of my life." After the sound was restored she delivered a short but strong set that highlighted by "Black Horse and a Cherry Tree" (which featured a passage of "Black Betty" by Ram Jam), "Suddenly I See" and a wonderful and unexpected cover of Tom Petty's "I Won't Back Down."

The latest version of Squeeze was up next. Tilbrook sang his heart out as the band roared through a greatest hits set that opened with "Take Me I'm Yours" and included powerful versions of "Goodbye Girl," "Cool for Cats" (on which Difford supplied the lead vocals), the Monkees-influenced rave-up, "Annie Get Your Gun," "Please Be Upstanding" from the 2017 Love Records release The Knowledge, "Another Nail In My Heart," "Hourglass" and "Up the Junction." While the band was rocking out, the audience was working up a sweat singing and dancing along. Squeeze got a bit kinky and definitely funky with "Slap and Tickle," from its debut U.K. Squeeze (A&M, 1978). The group also thrilled long-time fans with other favorites including "Is That Love" from East Side Story (A&M, 1981), "Pulling Mussels (From the Shell)" from Argybargy (A&M, 1980)," "If I Didn't Love You" and, of course, "Tempted." The band's impressive fourteen-song set ended with a tour de force version of "Black Coffee In Bed."

After a short intermission, Daryl Hall & John Oates and their band delivered a powerful set of blue-eyed Philly Soul. When the band appeared, Hall and Oates were the epitome of cool as they came front and center. At 73-years-old Hall still looked stylish, rocking a leather jacket with aviator shades. John Oates, who recently had gallbladder surgery looked happy, healthy and quite dapper wearing a bomber jacket, t-shirt and jeans.

The twelve-song main set opened with "Maneater." With that the audience was safely in the palms of the legendary musicians' hands. The sold-out audience was treated to an evening of "classic" tunes which were enhanced with falsettos, ad-libs and slight twists that cannot be found on the studio versions. The beauty of this was clearly evident by the fact that each song kept its DNA and the updates gave them a life-force that was felt throughout the crowd.

Hall led the band through energized versions of the Righteous Brothers' "You've Lost That Lovin' Feelin'" (originally covered on the 1980 RCA Records release Voices) and updated versions of "One On One" and "Out of Touch." The set was also peppered with some fantastic rarities: a wonderfully soulful version of "Everytime You Go Away" (about which Hall took the time to remind the fans that he wrote the song) and a silky and charming rendition of the Dramatics' "Whatcha See Is Whatcha Get." The audience sang along on the R&B flavored "She's Gone" and supplied their own backing vocals on "Say It Isn't So" (which featured saxophonist, Charlie DeChant).

Other highlights included a stellar version of the melancholy "Sara Smile," "Adult Education" and the main set ender "I Can't Go For That (No Can Do)" which had the entire audience on its feet and dancing. The four-song encore was the mini-concert that could be described as the fantasy show that every Hall & Oates fan wants to see. "Rich Girl," "Private Eyes," "Kiss on My List" and "You Make My Dreams" represented twenty minutes of pure joy during which electrified the fans and if the collective feeling could have been harnessed, would have the Provided enough energy to power the entire tri-state area.