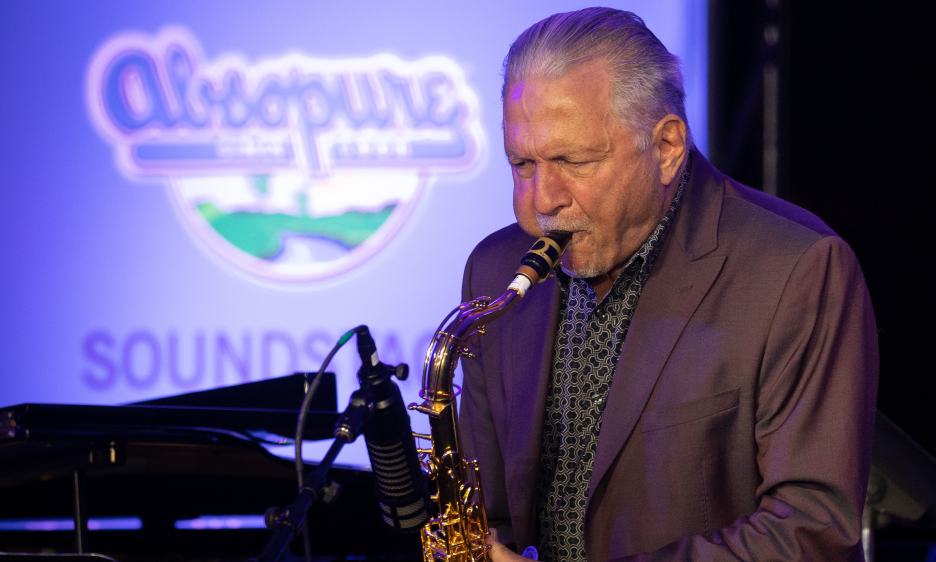 This is the second of four pieces covering the 2021 Detroit International Jazz Festival. Two weeks before the festival, a decision was made to go to a virtual format due to the surge provided by the Delta variant of Covid-19. Three outdoor stages became three soundstages in the ballrooms of the Renaissance Marriott hotel. All sets were run back to back, with no overlap. This made roaming the grounds and catching at least a piece of everything, impossible. While the broadcast of Facebook and YouTube formats offered every note of the festival, we as media members were allowed into the soundstages to witness the music live. The broadcast crew and writers were the only members permitted in the broadcast area. In order to find time to write, have a bite to eat, or take care of any professional and personal matters, you literally had to pick and choose which sets to miss from the continual flow of performances from noon to midnite. Writing a set by set description encapsulating each performance became impossible. While in the soundstage, you could not tap into the broadcast for context, set lists and other helpful items. We were virtually in the dark, pun intended. The real stories began to emerge—the quick change to virtual, the amazing quality of the broadcast, the vibe of the music minus a live audience and exceptional deeds in terms of mentorship and impacting the future of jazz. Our times, the worldwide pandemic, was indeed a huge part of the story. And so you will find highlights of many sets, plus storylines that helped make the 2021, 42nd annual Detroit International Jazz Festival a unique success. Thanks to festival photographer Jeff Dunn, wonderful images of the four days are included.

Day Two: From Havana to Detroit, With Love

Saturday represented the first full day at the 42nd annual Detroit Jazz Festival. It was a day that saw veteran pianist Kenny Barron grace the festival stage in trio, where daring trumpeter Etienne Charles offered myriads of rhythms from the Caribbean. Kurt Elling teamed with fellow vocalists Dee Dee Bridgewater and Allan Harris to perform his new, original radio play and Keyon Harrold presented "Jazz and the Birth of Hip Hop." Veteran tenor man Jerry Bergonzi led a modernist late night set, and vocal supergroups Take 6 and The Manhattan Transfer met to lock horns on one stage, at one time.

The Renaissance Marriott began to fill up with festival participants the night before, and a tangible vibe began to have a presence in the lobby area where all were required to check in and pass covid protocols. A cloudy, warm day, images of thousands of patrons filling Hart Plaza to take in the day's activities began to gain prevalence in the collective mindset. Of course, it was not to be. A walk up Brush St. the night before, brought realization that this was not the west coast— there was no ninety percent vaccination rate, or a socially active population moving the city in the direction of pre-pandemic normalcy. The decision to go virtual began to make sense— while some bars and restaurants were open and filled with maskless patrons, others had been shuttered for more than a year. The giant towers of the automobile industry that occupy the Renaissance Center at the festival location are veritable ghost towns. The assortment of corporate eateries that line the atrium at the convention center complex have been closed since April of 2020. Still shrouded in pre-pandemic economic darkness, the added burden of Covid-19 had brought this vibrant, culture rich mecca to a point of sociological distress.

A step into City Market, a bodega on Brush St., at midnight, summons the human element to illuminate the non-media fed impression of the Motor City. Two couples danced to r&b and hip hop on the sidewalk, car door open, and music blaring out onto the street. The bodega had most of what anyone would need in narrow, tightly packed aisles. The late night crowd was polite, friendly, and happily engaged. Little things, simple things, became the only way a festival participant could experience the people of this great jazz city. Without thousands of people roaming between the three stages that were now inhabiting ballrooms in the hotel, that wonderful feeling of fellowship would have to be sought out on more personal terms.The grace and spirit of the people of Detroit was something to experience in a whole sense. We continue to look forward with hope that Hart Plaza will be filled with patrons and the marvelous sense of community that is so important in American jazz culture.

The band formed at NYU during the pandemic, enabling opportunity in isolation at the school's recording studio under the auspices of music tech students who as well needed the studio time. Bassist Warren Louie, alto saxophonist Tiger Diep, tenor saxophonist Cole Palensky and drummer Anton Kot joined Lee to form this two sax quintet. An audition recording was created, but the band had to audition live for the gig in the Detroit area. The evening audition took place at the Dirty Dog Jazz Cafe in Grosse Pointe. "If we won, the prize money would make us break even," says Lee with a hint of irony.

Needless to say, the band came out on top of that deal, and continued to deliver on the festival soundstage. In certain moments, the band's modernist leanings would come out, alluding to a sound one might find within the recent two saxophone quintet headed by pianist Gerald Clayton. In other straight ahead moments, utilizing youthful positivity and superior chops, the quintet simply burned. Drummer Kot dotted the performance with polyrhythms and a composer's wit. There was no groove domination—Kot played music, with the melody and harmony guiding his approach as much as the rhythmic qualities of a given piece. His composition "Ripples" was a true high point of the set. The conversation between Kot, Lee and Louie laid down an intuitive, open-ended canvas for Diep and Palensky to freely dive between challenging arrangements and avenues of open improvisation. Their riveting one hour set at 11:35 AM was the impetus that drove the day for many in the media—the experience of seeing L Stop made the future of jazz music in the American heartland seem just a little bit brighter.

When attending a set on one of the three festival soundstages, you are witnessing a live broadcast. There are limited spaces you can sit or stand, there is no applause and certainly, no dancing. All of these directives seemed impossible to comply with when Cuban born, Barcelona resident, Omar Sosa took the stage. The master pianist performed with his band, joined by a quintet of Detroit horn players led by festival Artistic Director, Chris Collins on tenor. Titled "The Havana-Detroit Jazz Project," the ten piece ensemble did not disappoint. Energetic and inspired, Sosa played like he was reveling in the afternoon sunshine along the Detroit River, driving with the impulse of Afro-Cuban rhythms, merged with brilliantly performed, in-your-face Detroit jazz and r&b horn arrangements. Collins, who throughout the festival is seen as a flash moving in several directions at once, managed to abandon his myriad of festival responsibilities to focus on what he is best known for—being a hit-it-out-of-the-park practitioner of the art of jazz, a brilliant soloist on tenor. Collins brought in hard hitting Detroit trombonists Denzel Donald and Chris Smith, as well as Detroit aces, trumpeter Walter White, multi-reedist James Hughes and guitarist Chuck Newsome. Sosa's Cuban band members were bassist Ernesto Mazar, drummer Amaury Acosta and percussionist Octavio Rodriguez, Jr. The set exemplified how jazz can be a dynamic bridge between cultures. The diverse pulse of these two great cities could plainly be heard in the music, if not through the rhythms and compositions, then directly through the collective language of improvisation.

The ten piece band worked its way through Collins' "Search For the Umbrella Tree," and Sosa's pulsing "Estancia." Compositions from the two leaders filled out the set beautifully, merging two cities that on the surface would appear diametrically different. The characteristics of each city was not an obscure notion one had to search for —Collins' compositions "Wood or Wire," and "Muirruhgachs, Mermaids, and Mami Wata," spelled out the Motor City in no uncertain terms. There was no musical language barrier for Sosa's romantically adorned "Semi-Arbertura" or "Ventana Cerrada."

The final set of the evening saw veteran alto saxophonist David Binney perform with his LA based band dubbed Angelenos, a quintet that includes contrapuntal basses, piano, drums and the ever-adventurous altoist Binney. The late night set proved to be a dynamic high point of Saturday's offerings.

Working within the framework provided by bassists Ethan Moffit and Logan Kane, Binney's postmodern playing combined with mildly and tastefully used electronics provided a continuous probing one hour set. The quintet performed selections from its upcoming album, Tomorrow's Journey. Pianist Luca Mendoza showed an advanced notion of harmony and a broad chromatic sense. comping sparingly and soloing athletcially. Drummer Justin Brown was a sensation the entire set, blending polyrhythms and artful cymbal work without overplaying—a noticeable trait of this band was the willingness to listen and react. This, of course, is the perfect scenario for Binney's willingness to go out on the edge and back again, to play tirelessly and endlessly through a piece and still leave the interest and fascination of the listener intact. His sharp edged runs riveted through his original compositions, and turned melancholic for "Loved." From there, the band turned on the afterburners with angular melodies and modal stretches that facilitated Binney's relentless adventurism.