Steely Dan: That Grand Dan Sound: Why Everyone Knows Steely Dan When They Hear Them

By Eric Pettine
October 8, 2004
Sign in to view read count 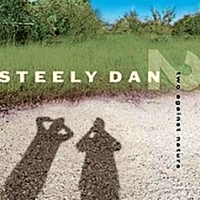 Ok, so Miles Davis, Charles Mingus, Thelonious Monk and Dave Brubeck used them throughout the 1950s. In the 1960s and most of the 1970s, adventurous and ambitious horn-adorned groups like Chicago and Blood, Sweat and Tears also experimented successfully with them too. But we're talking cool chords (and their various permutations) here folks, not drugs.

It's pretty much accepted by the general populace how great the writing/performing talents of, say, Billy Joel, Elton John and Paul McCartney are. But, and it's a big but, how many of the aforementioned people have kept their musical sound progressing, fresh, new, exciting, consistently musically top-flight and expend inordinate amounts of time and energy into the total compositional process?

First of all we must acknowledge that Steely Dan is a very different animal indeed. Both Donald Fagen and Walter Becker have a deep appreciation for and understanding of the language of different kinds of musical styles (especially the Impressionistic era [listen to the chorus section of "Gaslighting Abby" for some nice whole-tone chord planing techniques that Debussy would've loved] and the Cool Jazz era [the splendiferously hip chordal sequences of the intros to "Peg," "Dr.Wu" or throughout "Aja" harken the chords/voicings that Gil Evans favored in his 1950s arrangements for Miles Davis for example]). They also understand, unlike most other "pop" music acts, how to write for/voice/orchestrate instruments other than their own. Even before they became known as Steely Dan, when they were working for Jay and The Americans, they wrote/orchestrated string and horn parts on the Capture the Moment album. On most of their own albums they either worked in conjunction with other arrangers such as Tom Scott (Aja and Gaucho) or Rob Mounsey (Gaucho) or did it all by themselves (Two Against Nature and Everything Must Go ) when writing the horn (brass and woodwind) parts. Check out the liner notes on most McCartney, Joel or John albums and see who did the rhythm/string/horn arrangements—you'll usually find names other than theirs listed.

With the Dan sound it's all about the VOICINGS of those great chords -what instruments get which notes to play and when—that form what we hear and call the Steely Dan Sound.

A terrific, behind-the-scenes peek into how the Dan went about creating their sounds can be found on the Rhino Company's Classic Albums video series featuring Steely Dan's almighty album Aja. Sitting at the recording console, Donald and Walter pick apart many of the sonic details that went into creating those enduring sounds we hear on especially "Deacon Blues," "Peg" and the title cut "Aja." At one point in the video Donald and Walter are discussing how they were looking for a certain instrument to play the high notes of the melody in the middle section of "Deacon Blues." After experimenting with writing an actual flute part "that didn't quite cut it" they ended up using a flute-like simulation done so tastefully on a synthesizer.

Longtime Dan guitarist Denny Dias reminisces about playing on "Aja" saying, "there's clusters (of notes) so close together that you can't stretch your fingers out enough to get all the notes at the same time. There are open voicings that are so wide apart that you can't reach all the notes."

Singer-great Michael McDonald reflects about laying down the vocal harmony tracks for "Peg" stating that " "Peg" doesn't sound like much of a part, but, the harmonies (voicings) are so close. That was a real learning experience for me to sing the chords part by part myself."

A recent visit to Howard Wright's excellent web site (Howard Wright's Home Page/Howard's Steely Dan Chords and Tabs ) provided an extensive/exhaustive insight as to what makes the Dan sound so special. He states that it is the consistent/constant use of what the Dan call (using their own innovative and jocular term) the Mu Major Chord (which for music theory buffs is basically a major triad with an added major 2nd). Howard states that, "the chord itself is not unique to Steely Dan—but the way Donald and Walter used the chord, the voicings they chose, and the chord changes they used, made it something rather special in Steely Dan music." He adds that, "using different voicings for the chord alters its sound, and there are some particular voicings that are used frequently in Steely Dan songs, giving a distinctive sound." Howard breaks down the Mu Major voicings into two distinct categories: Type I (pre-Royal Scam) and type II (especially on Aja and Gaucho ) Mu voicings. The Type II Mu Majors are referred to by Howard as the "Classic Voicings" which are found/heard in "Deacon Blues" and "Black Cow" (from Aja)—"classics" indeed.

Also at Howard's site one can listen to/download in WAV/MP3 formats, either a sound collage of the Mu Major Chord from actual Dan songs or sound examples (played on electric piano) of the distinct and individual voicings of the chords. Once the listener becomes aurally familiar with the sounds of the various voicings of the chord played by rhythm instruments, he/she should especially listen to how the horns (brass and saxophones) sound playing the Mu Major in different voicings—check out "Deacon Blues" and "Home At Last" from Aja and "Babylon Sisters" and "Gaucho" from Gaucho. The Dan created a whole new and unique musical timbre and style as a result.

As far as this writer knows, nobody on the popular music scene has consistently done or is doing what the Dan has to create their own (quasi) musical language and sound. Maybe the understated guitarist Dean Parks summed it up best about the Dan sound when he said "it is quite an amalgamation that's for sure—and it's interesting to note that it can be a hit."

Title: That Grand Dan Sound: Why Everyone Knows Steely Dan When They Hear Them | Year Released: 2004 | Record Label: MCA